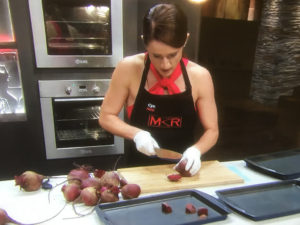 Who was eliminated from MKR tonight? It’s Court & Duncan vs Mell & Cyn. We know that Josh has a falling out with Amy, but who is going home?

This is what they are cooking.

The teams get into the kitchen and start each of their dishes. They have 1 1/2 hours to deliver their first dish. Josh starts heckling Court and Duncan, Amy has enough and walks to the other side of the room. He eventually apologises but the other contestants are not impressed. The teams are getting their entrees done, Court & Duncan’s chicken looks amazing while Mell & Cyn’s dish doesn’t look eye pleasing, but does it taste good?.

First to be tasted is Mell & Cyn’s risotto. Liz says it has lovely flavour combinations, but it is undercooked. Guy says it needed several more minutes. Pete says if the dish is risotto, you really need to nail the risotto. Court & Duncan’s fried chicken is next. Karen says it was the perfect, perky entree. Colin says its on trend, but it needed a bit more spice in it. Guy says its good, its real “dude food”. Manu says all it needed some more salt in the crumb to make it a 10/10 for him.

Both teams get back into the kitchen to complete their mains. Mell is happy that her ice-cream has set. She makes a passionfruit curd and the helps Cyn by pureeing the parsnip mash. Court has made the soba noodle dough but she is having trouble rolling out the dough, the dough is too dry. She adds some more soda water to the dough and hopes for the best. They roll the soba noodles out again and are really happy with them. Duncan opens the pressure cooker and the meat inside is cooked perfectly. Mell and Cyn start their sauce. Cyn fries the tempura oysters. Both teams start plating up. Time is up!

It’s time for the judges to taste the main course, it looks like it might be a close one. The judges taste Court and Duncan’s broth first. Guy says the noodles are made well, he loves it. Colin says he loves it too, it’s thought out well. Pete says it’s a great sudden death dish. Next thet taste Mell and Cyn’s beef dish. Liz says the beef is cooked really well. Colin says the dish  worked well but he would have liked some more texture. Pete says the sauce wasn’t exciting.

The teams are back in the kitchen for their final dish, dessert. Will this be the dish that decides who will be eliminated tonight? Duncan is making a berry jam to go with the yoghurt pannacotta. Mell checks her passionfruit curd and it is not thick enough so she decides to make a meringue as well. Duncan is really concerned that his jam will not thicken in time. Mell puts her almond tuilles into the oven. Court decides to take a pannacotta out as a tester. She’s really happy with how it has turned out. Mell has taken her tuilles out of the oven. The teams now have only 5 minutes to plate up their dishes. Duncan is still really worried about his jam. Mell and Cyn are really rushing to plate up their dish and it’s looking sloppy. Court decides the raspberry jam is not quite what she wants so she leaves it off the plate. Time is up!

The judges return to taste dessert. They taste Mell and Cyn’s dessert first. Karen says she likes the vanilla bean ice-cream and the tuille. Guy says the italian meringue was well made but should have been blow torched, the tuille was a little thick for him. Next they taste Duncan and Court’s pannacotta. Guy says the pannacotta has a great texture but he wants something crunchy.  Colin says it is missing some strawberries or raspberries. Karen doesn’t really like the dessert today. Manu likes the bitterness of the chocolate and the sourness of the pannacotta.

Now it’s time to find out the scores, who will be eliminated from MKR tonight.

Mell & Cyn have been eliminated from My Kitchen Rules tonight.

2 thoughts on “Who Was Eliminated From MKR Tonight? Court & Duncan vs Mell & Cyn”