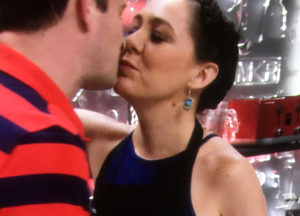 My Kitchen Rules elimination tonight is between Mark & Chris and Brett & Marie. Who will be eliminated from MKR tonight? The two teams must cook in a sudden death challenge at kitchen headquarters.

Here is what Brett & Marie are cooking in the elimination tonight:

The teams work hard to get started on all their dishes. Before you know it, time is up and the teams have plated their dishes.

The judges start with Mark & Chris’s bisque. Liz says its elegant and delicate, a great way to start. Karen says it could have been strained again to make it smoother, but the flavour is there. Manu loves the flavour of the lobster. Next is the scallops from Brett & Marie. Guy says they were cooked very well, not overcooked. Colin says they didn’t need to add sugar to it. Pete says its a confusing dish, habanero sauce with sweet figs doesn’t mix. Manu says the chilli sauce is great, but doesn’t belong on the plate.

It’s on to main course. Both teams start out well, but Brett & Marie run out of mushroom pâté for their roulade. They need to make more, but they don’t have much time to repeat a whole element. Mark & Chris realise they are running out of time when they start cooking their schnitzel, they want to get two pieces on each plate but they might not have time. Just one piece may not be enough. The teams start plating up. They manage to get two pieces per plate, just in time. It’s judging time.

The judges start with Brett & Marie’s venison. Liz says the marriage of flavours didn’t work in the dish. Colin says the truffle has overpowered the dish. Guy says we have moved away from rolling meat, because it doesn’t cook the same throughout. Manu says they didn’t focus on the dish as a whole and the roulade could have been cooked better. Next, Mark & Chris’s Cotoletta is judged. Guy says its just like “Festive Sunday Lunches”, it was simple but so flavoursome. Karen says the polenta is rich and creamy. Pete says its a whole style dish it makes sense. Liz says its a lot more simple than the other dish but that is what made it.

It’s time for the judges to taste the final dishes for dessert. They taste Brett and Marie’s peanut butter and jelly sandwich first. Guy says he loved the taste of the biscuit and the jelly. Karen liked the jelly. Liz says the biscuit was a little thick otherwise it would be perfect. Next they taste Mark and Chris’ cannoli with chocolate mousse. The judges do not crtique the dish, who will be elimuinated tonight?

It’s time to find out the judges scores.

Brett and Marie have been eliminated from MKR tonight.