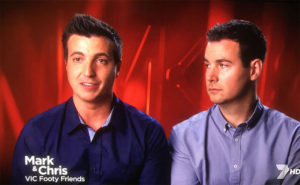 Spoiler alert! From the intro of the show we believe Caitie & Demi may be eliminated tonight, the promo showed the girls crying, could this be the give away? Read on to find out.

Here is what they are cooking. Mark & Chris are making Fettucinne Cabonara for entree, Beef Fillet with Mushroom Gratin and Capsicum Puree for main and Peanut Butter Parfait with Salted Caramel Sauce.

Caitie and Demi are making Gnocchi with Sage and Burnt Butter Sauce for entree, Pumpkin and Olive Risotto with Tempura Zucchini Flower for main and Italian Ricotta Pie with Raspberry Cream for dessert.

Caitie and Demi are having issues with their potato for the gnocchi, they decide to use a food processor, a cardinal sin. Mark and Chris are a bit rattled cooking their cabonara, they want to cook the noodles individually so they don’t all stick together, this is causing a bit of chaos and a logistical nightmare!

Time is up and entrees are done. Both teams get their dishes together and they look good. The judges start with Caitie and Demi’s gnocchi. Karen says there are several methods to making gnocchi but this is not the best method. Liz says hers was chunky. Guy says the flavour is there but there just isn’t enough of it, the gnocchi is too heavy. Pete says it is rubbery, with an hour and a half to make them it’s not good enough.

On to Mark and Chris’s fetuccine. Guy says they stuck to a classic, the pasta was al dente he likes it, Karen says there should be more caramalization of the pancetta. Pete disagrees, he thinks the pasta is way under cooked and the pancetta and egg weren’t cooked enough. Manu agrees with Pete. Is this because the boys cooked them all separately?

The teams return to the kitchen to cook their main courses. Demi and Caitie have forgotten about their ricotta cakes and had accidentally left them into the oven, they are sunken and not looking right but the girls need to focus on cooking their risotto. The boys are cooking the mushrooms to go with their steak and are making a capsicum puree. Caitie is filling the zucchini flowers to go with their risotto. The girls started their risotto too early. With 20 minutes to go it is done. It’s not a good idea to let risotto sit! They move on to their flowers. Mark and Chris move on to cooking their steak, seared on all sides and its in the oven. They put their roasted capsicum in the blender, but leave the skin on, will this make it too bitter or give it a bad texture?

It’s plating time. The boys let their steaks rest while they plate the rest of the elements. The girls put their risotto on the plate, its a bit firm from resting. Time’s up.

First to taste is Caitie and Demi’s risotto. Guy says its gluggy, it could have been saved by adding stock at the end, but the flavours are out and olives don’t work. Karen says the risotto is chalky and the pumpkin doesn’t go with thte olives. Manu says the cheese in the flower is dry. Pete doesn’t like the rosemary and chilli in the risotto. Colin doesn’t know why the zucchini flower is there.

Mark & Chris’s beef fillet is next. Liz says the beef was cooked perfectly, but she has an issue with the capsicum puree. Guy says its bland, it doesn’t belong. Colin asks if they are given too much credit, he was expecting more.

It’s time for the contestants to cook their final dish for the evening, dessert. The boys have made a chocolate mousse and are making a salted caramel sauce to go with their peanut butter parfait. The girls are making spun toffee and a raspberry cream to go with their ricotta cakes. Mark is having a lot of trouble quennelling the mousse. Chris is having trouble with his salted caramel sauce, it’s seized up. He doesn’t know what to do and contemplates making another sauce. Mark adds some butter to the sauce and it loosens up, it might just work out overall.

The judges taste the peanut butter parfait first. They comment that it is quite small. Liz says it was a good flavour combination. Karen says it is a step up from the main meal. Guy says its missing a sponge cake or a biscuit to accompany it. Colin comments that the salted caramel sauce has hardened up. next they taste Caitie and Demi’s ricotta cake. The judges comment that it looks pretty.

Its time for the judges to score the teams.

Caitie and Demi have been eliminated from MKR tonight.