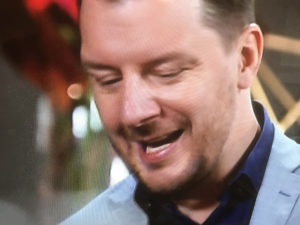 What does Josh say on MKR tonight? It is Tyson & Amy’s Ultimate Instant Restaurant round and Josh calls Amy a… Find out here.

Manu pulls Josh aside and lectures him on his behaviour. We believe Josh calls Amy a slut, keep refreshing to see this unfold live!

Here is what Tyson & Amy are cooking in their Ultimate Instant Restaurant.

Tyson and Amy’s menu is different to say the least, the flavours are not the usual combinations you will see. They get on to the entree and before you know it it’s plating time. They bring out the dishes. Amy says “Here you go seafood king”. Josh says “Thanks, slut”. Everyone is quiet. Amy looks physically upset. The judges taste the dishes. Manu chose the duck liver. He says he read the item and was very excited. It was a fabulous idea but the execution was far off. The bread should have been smaller, it was a bit rushed and unsure how it should be eaten. Pete chose the scampi. He says the scampi was cooked perfectly but he found the passionfruit too intense, he liked that they pushed the boundaries but wouldn’t order the dish again.

It is main. Pete ordered the lamb. He said everything tasted great, but there was not enough sauce. It looked beautiful and the lamb was cooked to perfection but just not enough. Manu had the tuna. He says “Pretty darn good dish”. The tuna was the star of the dish, “just gorgeous”. He liked the addition of the dragon fruit.

The final dishes hit the table, it’s dessert time. Pete has the G and T pear and Manu has the braised parsnip with curd and basil ice cream. Manu says he’s never seen anything like this dish before, but he really enjoyed it but he doesn’t know why he enjoyed it, he says all of the flavours together worked really well. Pete says it was the most exciting dessert they’ve ever had on MKR, he loved it, it was a knockout. He loved all of the elements on the plate. Surprisingly some of the other contestants did not enjoy the G and T pear.

It’s time for the contestants to score their meals tonight:

Now it’s time for the judges to score the dishes.

Grand total score of 83/130. This places them second on the leaderboard under Valerie and Courtney. Della and Tully are cooking next.

2 thoughts on “What does Josh say MKR? Ultimate Instant Restaurant Round Tyson & Amy”