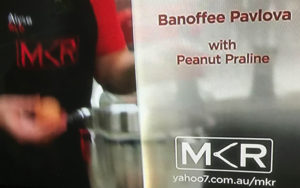 Sudden death elimination on My Kitchen Rules tonight is between Josh & Amy and Alyse & Matt, who will be eliminated from MKR tonight?

It’s time for the judges to taste the first dish, Josh and Amy’s entree. They enjoy the flavours and are impressed with how the fish is cut. Pete says it was a terrific start from team 1. Next it is team 2’s dish of salmon. The judges comment that the salmon is cooked perfectly. Guy says it is unbelievable. Liz says the fish just melts in your mouth. Karen says the sumac works really well with the salmon. Guy and Colin disagree over whether they should have used the sauce or not.

It’s time for the contestants to get back into the kitchen to prepare their main dishes. Matt is preparing the stuffing and Alyse is stuffing the spatchcocks. Josh is filleting and chopping up a mackerel. They have made their own curry paste for the Thai green curry, Alyse is making some silverbeet. Matt manages to burn the shallots that he had prepared for the carrot puree, he decides to use them anyways. The other contestants think it is a big mistake. Josh is putting the mackerel into the curry. Some comment that he has put it in too early. Josh is also having trouble cooking the rice as it is sticking to the bottom of the pan. Amy adds some raw curry paste to the curry to add more flavour. There’s 10 minutes left on the clock. Matt and Alyse need to take the spatchcocks out of the oven, the skin is not brown on them but they have to plate them up anyways. Amy and Josh are not happy with their rice or curry, it looks terrible as they slop it into the bowls. Matt and Alyse feel like they are just slopping things onto the plate as well. Time is up.

It’s time for the judges to taste the mains. First up is Josh and Amy’s Thai green curry with Spanish mackerel. They taste the dish. Karen says the flavours are there but are very gentle. Pete says the fish is overcooked. Manu says the rice is terribly cooked. Now they taste Matt and Alyse’s dish. The judges all comment that the spatchcock is undercooked. They are not enjoying eating it. Karen says they should have turned the oven up. Guy says the carrot puree has a weird burnt flavour. Pete says the silverbeet chips are burnt.

The teams get back into the kitchen for one last time to cook their desserts. Alyse is making the toffee for the banoffee pie. Amy has already put the lemon meringue pies into the oven. Matt slices up the banana for the pie and caramelises them on a frypan. Alyse has made the peanut praline while Matt has burnt the banana. Amy has taken her lemon meringue pie out of the oven. She is having trouble working out how to cut the pie up evenly though. Matt and Alyse are plating up their pavlova. The praline hasn’t set and it soft and mushy. Time is up.

The judges re-enter the restaurant for the final course. The first dish belongs to Josh and Amy. The judges taste the lemon meringue pie. Liz says the meringue and pastry is not right. Guy says the lemon filling itself is nice but the pastry has let them down. Pete says the meringue is undercooked. Next they taste Alyse and Matt’s pavlova. Karen says the idea was brave but the technique was not right. Colin says the elements of the pie were not there. Pete says the pavlova itself is dry and dense and there is nothing really redeeming for the dessert. Pete says both desserts were pretty average. Colin says both teams have performed consistently throughout, Manu agrees and says it will be tough to judge.

Alyse and Matt have been eliminated from My Kitchen Rules tonight.