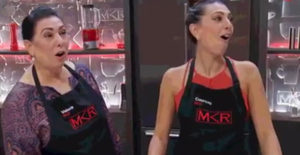 Tonight is the third quarter final on MKR and someone will be eliminated from My Kitchen Rules tonight. The teams have to fix their past mistakes.

Amy & Tyson had the dish of the day in the last episode so they have an extra 10 minutes. Here are what the contestants are cooking:

The teams do well in this first round. The judges aren’t sure on David & Betty’s Macha as the flavours they are combining don’t go well together. They all get their dishes plated up.

The judges taste Mark & Chris’ snapper first, its cooked and they are relieved. Tim & Kyle’s croquettes look great and cooked inside. Della & Tully’s quail is next and this time it is cooked. Amy & Tyson’s taco is a soft taco and it looks good, the judges don’t comment on it. Valerie & Courtney’s tart is very short, does it work with the rest of the dish? Finally David & Betty’s macha gets an odd look from the judges.

The judges say that all the dishes were improvements from their first attempts. The two bottom teams from this round will cook off against each other.

The team with the best dish tonight was Tim & Kyle. Their technique was right and their croquettes were delicious.

The two teams going into sudden death are Valerie & Courtney and Della & Tully. Their dishes were good, but not perfect.

Valerie & Courtney and Della & Tully have to cook a dish good enough for the MKR final and one of these teams will be eliminated from MKR tonight. They have 90 minutes.

Della & Tully’s dish was first to be tasted, Pete says it is the best dish they have cooked in the competition. The beef was cooked perfectly and the wasabi mayonnaise was perfect. Manu says it was gorgeous. Valerie & Courtney’s dish was second, he said this dish was “next level, big time”. The flavours were incredible. Pete says there was something beautiful about watching someone cook something they love. Pete says it was the best curry in the competition.

So who will be eliminated? Both dishes were incredible.

The team eliminated from My Kitchen Rules tonight was Della & Tully.