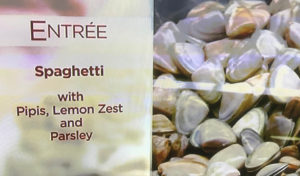 It’s round three of MKR with Colin and the new guest judge Darren Robertson. First up cooking this round is Mark and Chris from Melbourne. They’re footy friends.

The boys head off to the shops to get their ingredients for tonight’s menu.
Entree- Spaghetti with pipis, lemon zest and parsley.
Main- Swordfish with black garlic polenta and tequila caper sauce
Dessert- Mint chocolate melting ball with chocolate soil.

Their instant restaurant is called “5th Quarter”. It is football themed.

They get straight into the kitchen to begin the dessert. They prepare the mix for the ice-cream. Next they melt the chocolate for the chocolate spheres. They then start making the pasta dough for the spaghetti. Chris paints the tempered chocolate into the chocolate moulds.

The guests arrive. The other teams seated at the table are Caitie and Demi, Lama and Sarah, Brett and Marie, Valerie and Courtney and Mell and Cyn.

The judges arrive. The guests are expecting Colin but they are not sure who the mystery other guest will be. Colin introduces them all to Darren Robertson. He is a chef from the UK. The menu is revealed and the guests are impressed.

The boys get back into the kitchen and prepare the spaghetti sauce. They put the spaghetti into the boiling water and are stressing out about over cooking the pasta. They plate the dish up and take it out to the judges. Colin and Darren taste the dish. Colin says the pasta was a little soft. He was expecting more sauce and for it to taste like the seaside. Darren says the spaghetti was overcooked and the sauce was under seasoned. The other contestants didn’t really enjoy the dish either.

The boys get back into the kitchen to prepare their main course. Mark is making the tequila and caper sauce. Chris cooks the swordfish on a frypan being careful not to overcook each piece. He then places them on trays in the oven. They plate the dish up and take it out to the judges. Colin and Darren taste the dish. Colin says the tequila sauce went well with the fish and the fish was cooked perfectly. Darren says the first was cooked well and he enjoyed the salsa, he would have liked more black garlic and tequila flavour.

The boys get back into the kitchen and make their chocolate mint sauce. It’s time to un mould the chocolate domes. They tap the moulds on the bench and the chocolate spheres do not come out. Finally after a little more tapping on the bench the domes come out and are beautiful and shiny. They plate the dish up and take it out to the judges and guests. The presentation of the dish is great. Colin and Darren pour the hot mint chocolate sauce over the sphere, the chocolate melts and reveals the ice-cream inside. Darren says the dessert was a show stopper and was a chocolate lovers dream. Colin says well done boys, they’ve nailed it.

This sets the benchmark on the MKR Leaderboard. Next to cook is Caitie and Demi.