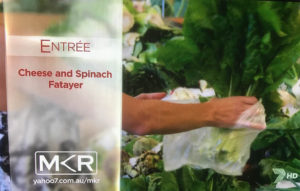 Lama and Sarah cook in their Instant Restaurant on MKR tonight. Can they stay off the bottom of the My Kitchen Rules Leaderboard? The Lebanese cousins from South Australia are cooking a traditional Lebanese menu tonight in their restaurant “Sahtein”

The girls are fighting a little in the kitchen during prep time, Sarah accuses Lama of being bossy. They make the dough and the filling for their entree. The guests arrive and the girls warmly welcome them all. Colin and Darren arrive at the instant restaurant. The menu is revealed to the guests. The girls plate up the entree, but they’re not super happy with what they have produced. Colin and Darren taste the dish. Colin asks the girls if they’re happy with  what they have produced. The girls reply that they’re not really happy with the dough. Colin says the pastry was thin and they needed more filling in them. Darren says the pastry had a nice flavour but some were undercooked. The girls did not seem as unified team when responding to the judges comments. They are a little annoyed with each other.

The girls get back into the kitchen to prepare their main course. Sarah is making some hommus, Sarah thinks it tastes fine, Lama thinks it has too much tahini. The tension is growing. The kafta is usually cooked on a charcoal grill or barbecue but today they decide to bake it in the oven. They have also changed the recipe for the tabouli. The girls plate up the dish and take it out to the judges. Colin and Darren taste the dish. Colin asks if it’s normally the way they do the dish, the girls obviously have change elements of the dish. Colin asks why they changed these elements. He says the dish tastes like a baked meatloaf. Darren says it wasn’t an appetising looking meal at all although he liked the filling. He thinks he missed the mark with this dish. The girls are even more upset after this critique.nfidrnt e

Can the girls redeem themselves on their final course. They are super confident with their dessert. Sarah is making the custard mix, suddenly they both notice that there are black bits in the pot of custard. They decide they can’t serve the custard. They throw it out and start again. The guests have been waiting almost 2 hours for the dessert. It’s now 2 hours and 30 minutes and the guests still haven’t had their dessert. The girls take the custard dish out of the oven finally and cut it up but it is not set. They take it out to the judges.

The judges taste the dish. Colin is speechless. Darren says the syrup was nice but the custard was not set and the pastry was gluggy. No one really enjoyed the dessert, especially after such a long wait. One person described it as scrambled eggs with noodles.

Grand total score of 39/110. They are at the bottom of the MKR leader board.