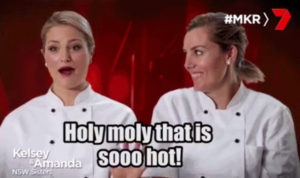 It is sudden death elimination on MKR. Josh & Amy are cooking against Kelsey & Amanda. Who is eliminated from My Kitchen Rules tonight?

Here is what they are cooking.

The teams work really hard in the first section of the cook to start all of their dishes and finish their entrees. Josh & Amy’s dish looks good, Kelsey and Amanda are worried their Calamari is not cooked good, they think it might be chewy. In come the judges.

Kelsey and Amanda’s Calamari is first to be tasted. Karen said they were heavy handed with the crumb, it is golden and crispy but there is too much. Colin would like to see the calamari cut smaller, its nothing he hasn’t had at his local fish and chip shop. Pete says it is disappointing when you get a dish and the star is the aioli, the star should be the calamari.

Josh and Amy’s soft shell crab is next. Liz said they have given them a really well done tempura batter. Guy agrees, it is crisp and gets the crab to sing, the salad is good but there is too much of it. Overall it is a good dish.

It is on to main course. Kelsey and Amanda have to lift there game for this dish. Can they get their rice fluffy? Can they save themselves from elimination? It is plating up time. Kelsey and Amanda are putting large pieces of parsley on top of their dish, they meant to put coriander, also, their curry flavour isn’t there… will this send them home? Josh and Amy’s dish doesn’t look eye pleasing but the salmon looks cooked. It’s judging time.

The judges start with Josh and Amy’s dish. Karen says she loves salmon and it was cooked just as it should be. Colin agrees. Liz doesn’t like the couscous, it doesn’t make sense with the dish. Pete agrees, they nailed the salmon but the couscous has let the dish down.

Kelsey and Amanda’s Prawn Red Curry is next. Guy says the vegetables aren’t cooked. Colin says its just like a creamy sauce, no spice at all. Liz comments on the strangeness of putting parsley on top. Pete says they needed to nail the curry paste. Manu says there are too many vegetables and very little prawn.

Finally it is dessert, the judges taste Kelsey & Amanda’s Churros first. Karen said they are kicking some goals here. The churros are cooked well, it is delicious. Liz said they are absolutely gorgeous. Colin says it is their best dish so far. Pete says it is a simple dish executed well. Next is Josh & Amy’s Apple Berry Fry Pie. Liz says she hasn’t had a dish like this before, it has some nice flavours but it is not cooked in the centre. Colin says the filling is good, but the sugar on top isn’t good and it is under cooked.

It is time for the scores, who will be eliminated from My Kitchen Rules tonight?

Who was eliminated from My Kitchen Rules Tonight?

Kelsey and Amanda have been eliminated from My Kitchen Rules tonight.