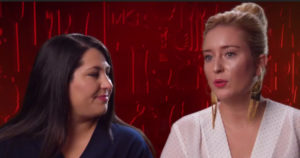 For entree, Della and Tully are cooking Charred Quail with Cous Cous, Pomegranite, Fetta and Mint. Main course will be Smoked Duck with beetroot, grapes and cherries. Finally tonight on My Kitchen Rules, Della & Tully are making Homage to Malta, Orange Cake with Yoghurt Sorbet for dessert.

The girls have no problem shopping and getting back to their kitchen, get their sorbet going. They have a bit of trouble cooking the cous cous, but figure it out in the end. Their quail is going to be cooked on the barbecue outside. Della char grills them, them and takes them back inside. The cut into it, but it is raw inside. Della takes it back out to the barbecue and throws it back on. It cooks now and they finish plating up.

They take it out the judges. Pete is the first to cut his quail, it is raw. Many of the other guest’s quail are also raw. It was a disaster.

The girls get back into the kitchen and plate up the beetroot, duck and cherry sauce. They take the dish out to the judges, Pete and Manu taste the dish. Pete says this is what he was expecting from them. Manu says the smoky flavour was light but he didn’t like the addition of the garlic aoili. Pete said there were too many elements on the plate and wasn’t keen on the garllc aoili either.

It’s time for the final course, dessert. Pete comes into the kitchen and questions the addition of a fruit salad to the cake and sorbet. Della decides to ditch the fruit salad and makes some candied oranges and a orange syrup but then begins to doubt herself. The girls decide not to add the orange syrup and plate up their dish to take out to the judges. Pete and Manu taste the dish. Manu says the sorbet flavour was nice but it was a little icy. He says the cake was a little dense. Pete says he can see they had used restraint but the cake was dry and it could have used an orange syrup. Manu says the candied orange wasn’t cooked enough.

Its time for the teams to score.

This places Della & Tully second last on the MKR Leaderboard