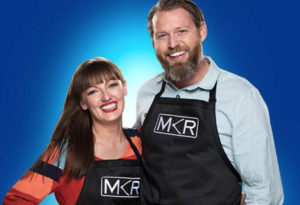 Court & Duncan are up tonight to cook in their My Kitchen Rules Instant Restaurant Round. Find out how they scored here. The couple from Melbourne and MKR’s “Hipsters”. Their instant restaurant Gastro Turf will serve a mixture of modern dishes.

The couple kick off their cook by getting their lamb ribs seasoned and into the smoker, they take four hours to smoke so they have to get them in quick. They also get their marshmallow made for the S’More, it takes 6 hours to set so it also is critical to get it in quick. They continue with their entree by preparing the fish. They coat the fish in beetroot and vodka to cure it. The dish is plated up and taken out to the judges and guests.

Pete and Manu taste the dish. Manu says the fish was delicious and he likes the combination of beetroot and ocean trout. The big disappointment of the dish for him was that he had to look for the fish, he said there was not enough fish in the dish. He said it is supposed to be ocean trout with salad, not a salad with ocean trout. Pete agrees, he was also not impressed with the whole tomatoes that were undressed. Manu was particularly upset with Court and Duncan when they told him they had more fish still in the kitchen, he couldn’t work out why didn’t serve it.

Court and Duncan get back into the kitchen to finish preparing their main. Duncan gets the smoked lamb ribs out of the bbq. Court is cooking the brussel sprouts. Duncan cuts through the meat and is really happy with it. They plate up the dish and take it out to the judges and contestants. The guests are instantly impressed with how the ribs look and smell. Pete and Manu pick up the ribs and bite into them. Pete says it was bloody delicious. Court starts crying, tears of joy. Pete says it was the best piece of meat he’s had in the competition in eight seasons. He loved the spice rub and the smokiness, it was just perfect. Manu says they were absolutely delicious. He enjoyed the parsnip puree, the potatoes were a little boring but he enjoyed the brussel sprouts and bacon. The other guests really enjoyed it, with the exception of Matt. Some commented on the inconsistency of the meat.

Court and Duncan get back into the kitchen to make their smores for dessert. Duncan is making a cremone. It is his second attempt at it today. They carefully plate up a generous serve for each guest and take it out to the judges while the biscuits are hot. Pete and Manu taste the dish. Manu says the first few bites were nice but he couldn’t eat the rest as the dish was too sweet. Pete says their technique is great but it was a struggle to eat it all, so much effort but it just missed the mark for him.

It’s time for the guests to score their meals tonight.

This puts Court & Duncan second last on the MKR Leaderboard