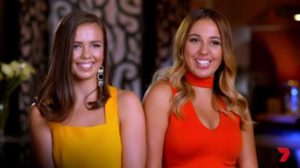 Tonight it is Caitie and Demi’s turn to cook on My Kitchen Rules. What will they score? Can they get to the top of the MKR leaderboard?

For entree, the pair are cooking Sushi. Main course is a Burger and dessert is a Matcha Tirimisu.

There was controversy over the use of MSG in the mayonnaise for the entree. The promo for this episode made a really big deal out of it, but the new judge (Darrent Robertson) didn’t seem to mind, he said he wouldn’t use it, but didn’t think it was a big deal. He did point out though, that the additive is for flavour, not a thickening agent as they were using it. The other contestants also didn’t seem to mind, Lama said she would usually avoid it but didn’t mean she wouldn’t eat the dish. The girls were grilled over the stickiness of their rice in the entree, not so much the additive in their mayonnaise.

This places Caitie and Demi second on the MKR Leaderboard