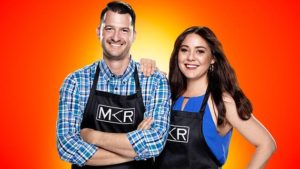 It is Brett and Marie’s turn to cook in their Instant Restaurant on My Kitchen Rules tonight. They are confident and think they will score 95, but can they stay off the bottom of the MKR Leaderboard?

The couple and parents from Brisbane in QLD are cooking a variety of Italian inspired dishes in their restaurant “Just In Time”. For entree, Brett and Marie are making Clear Tomato Consomme with Prosciutto and Buffalo Mozzarella. Main course is Black Pudding Stuffed Chicken with Root Vegetable Mash and Whiskey Cream Sauce. Finally for dessert, Brett and Marie are making Lemoncello Mousse with Lavender Biscotti.

After shopping for their ingredients, the couple start with the consomme and the mousse. They make just enough mousse dishes with not a single one left over to taste.

The consomme is made but the first egg float to make the soup clear has not worked so they do it a second time. Brett and Marie are happy that the consomme was finally clear. They plate some mozarella in the centre of the bowl, a piece of proscuitto on top and the consomme all around it. They place a cloche on top and take it out to the judges.

Colin and Darren taste the dish. Colin says he commends them for making a consomme and he likes the idea of the cloche. He says the consomme was not clear and that was because of the mozarella that they had added and the proscuitto was no crispy as it was in the soup. Darren says it was underseasoned and watery and flavourless. He tells them to not lose their confidence.

Brett and Marie get back into the kitchen to prepare their main. They fill the chicken breasts with the black pudding, wrap them up, fry them and then place them in the oven. Brett is making a whisky sauce. Colin enters the kitchen and asks how long they are going to cook the chicken, they tell him they have a test piece of chicken in the oven. He is not thrilled with their method. They take the test piece of chicken out of the oven and slice it  open.

They take the dish out to the judges. Colin says Matt talks the game, and he doesn’t like it when people talk themselves up. But tonight he backed it up. He said “this is why we are here”, it was a very technical dish to do, the chicken was moist and the pudding didn’t over power. It was bang on. Darren said the dish blew him away, he liked the use of the prosciutto, the only negative comment was it came close to lacking some freshness, maybe more asparagus, but with dishes like this they will make it to the final.

Colin says when the dessert hit the table it was a “wow”, it looked good, but that is where it stopped. He said he couldn’t taste the lavender and the mousse had a strange consistency and needed more flavour. Darren said “not again”, the dish looked great, but the flavours were too subtle, it needed more flavour and the biscotti should have had more crunch, maybe with some almonds.