Tonight is Bek & Ash’s instant restaurant. What are their scores? The best friends are from Perth in W.A and are cooking tonight on My Kitchen Rules. 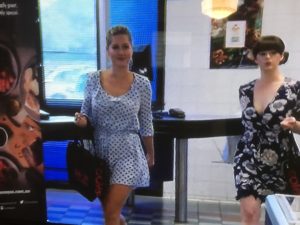 For entree, they are making Roasted Vegetable Tart with Balsamic Glaze. Main is Goldband Snapper with Fennel, Fig and Pear Salad. Finally, for dessert the best friends are making Profiteroles with Orange Custard and Chocolate Sauce.

The girls have to drive 45 minutes to get their fish from the best fish place in fremantle. After all the shopping, this leaves them with less time to cook than other contestants.

They style their restaurant “Wildfields” in the theme of a music festival. Can the girls make it to the top of the MKR leaderboard tonigt? There are new My Kitchen Rules records broken tonight what could they be? We’re about to find out.

The girls start on their vegetable tart. They try to meet Manu’s expectations by seasoning everything very well. Once their tart fillings are under control. They start on the choux pastry for their profiteroles and the tart case. The leeks have not gone crispy as they had hoped and their tart shell cases have shrunk. The fill the pastry cases with cream cheese, then the vegetables on top, rocket leaves and then they drizzle the balsamic glaze over the top. They take their entree out to the judges and the guests. Pete and Manu taste the dish. Manu says he does not enjoy the raw garlic taste, he says it has killed the taste of the tart. He says the vegetables are cut so small that he cannot taste them. Pete says he does not know why they used cream cheese, he said it was just a cheesy garlic tart, he did not like the dish either. The other contestants tasted the dish, they also couldn’t believe how much garlic was in the dish. Betty is getting frustrated that the other contestants are not saying what they really think about the dish.

The girls get back into the kitchen to cook their main dish. They begin cooking their fish and hope that the pan is not on too high. The butter and the oil is burning in the pan and the fish is getting tough on the outside and raw on the inside. Ash ends up cooking another batch of fish. She is still not happy with the second batch of fish and she is feeling stressed. It has been an hour and 30 minutes now since the guests have had their entree. Ash cooks a third batch of fish. Bek is making a salad. She is making the dressing and realises that she doesn’t have enough walnut oil. The guests have now been waiting for 2 hours for the main meal to come out. The girls are still not happy with the fish but they have to serve something so they decide to use the fish they have. They plate the dish up and it doesn’t look good. The fish sizes are all different and it is only served with a small side salad and half a fig. They take the dish out to the judges. Pete says he has never had a dish like this in the competition. He says the fish was overcooked, the salad was underdressed. He says the dish was missing love. Manu says it was not a complicated dish but he can see the stress on the plate. The other guests were underwhelmed by the simple fish and salad dish.

The girls get back into the kitchen. Bek takes the profiteroles out of the oven and they deflate, she fears there will only be one profiterole per person. Bek melts the chocolate and then adds the cointreau, the chocolate mix does not work. She throws it out and decides not to add the cointreau to the second batch. Ash is making the custard mix for the filling but the eggs have scrambled and it looks a mess. They decide to use the custard and serve the dish to the judges. They taste the dish. Pete says it was the best dish of the night, it wasn’t too sweet and the orange flavour wasn’t too strong. He would have liked more than one. Manu says the custard and the choux pastry were not quite right. The other guests taste the dish. They are not impressed, Tyson says it was way below average.

Grand total score of  26/110. This is the lowest score ever in MKR history.