Home » MKR 2017 » Baking for Bikies Challenge – Who is going to elimination? 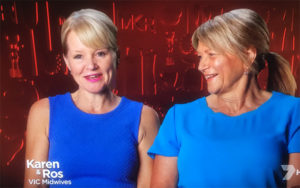 It is the Pink Ribbon Motocycle ride for breast cancer on My Kitchen Rules tonight. The two bottom teams will go to elimination. The bikies will start the ride and when they come back, they will be expecting baked goods from the contestants. The bikies will determine the top teams (safe for the next two eliminations) and the judges will determine the bottom teams. Here is what they are cooking:

It is an intense cook, the contestants have very little time before the bikies come back for their feed. Josh is being a jerk to Amy and will blame her if they go into elimination. He isn’t listening to her despite her being the head chef today. Will this be their undoing? Amy and Tyson are complaining about cooking in the car park, they are under pressure after just scraping through the elimination challenge last night.

With 15 minutes until service, Karen and Ros are yet to make their merringues. Court & Duncan are happy with their flavours. The judges say Mark and Chris have set themselves a big challenge with their pies. Caitie and Demi are having issues with their second batch of egg whites.

The bikies have returned.

Caitie and Demi only have a few merringues readdy and have to tell customers to wait. The judges taste David and Betty’s dish, they like the shortness of the pastry “Its actually quite yummy” Pete says. They taste Brett and Marie’s dish and think its a bit dry, not the texture you would expect. The puree is not creamy either, it might have split a bit. Next is Josh & Amy’s muffin. The judges think its a little bit dense but the flavours work together. It doesn’t have the “wow” factor, but its a pleasant dish. Pete and Colin taste Tully and Della’s eclair, they like the filling.

Mark and Chris’ apple pie donut, it is dry. They baked it instead of frying it, which has changed the texture and the flavour. Valerie and Courtney’s sticky date cupcake was quite heavy. It was moist but the topping was a bit sweet.

At this point, Josh and Amy have run out of muffins, have they made enough money to stay out of elimination?

Mell and Cyn’s empanada is next to be judged. The pastry crumbles but its a bit dry, with the relish it is sweet, salty and spicy all at the same time. Karen and Ros’ friand is next, their lemon curd is great and its smooth, its “confident cooking” says Colin. Kelsey and Amanda’s pavlova is next. Pete says its “bang on”, chewy in the middle and hard on the outside.

Caitie and Demi’s merringue is next to be judged. Their merringues aren’t as good looking as Kelsey and Amanda’s. The caramel is really sweet and its a strange combination when you eat all the pieces together. Pete says “its a very strange flavour”. Pete describes Caitie and Demi’s dish as a “train crash”, they had a good dish but the caramel just didn’t work with the rest of the dish.

Amy and Tyson’s brownie is next, it’s dense, Pete says “wow, i think Amy and Tyson are back”, the loved it.

Court and Duncan’s cornbread, Colin says its really good and Pete says the Jalapeno is a great flavour.

Time is up. Who is safe and who is going to elimination tomorrow night?

The winning team is Court and Duncan’s jalapeno cornbread with chilli dip. The two teams heading to sudden death are Caitie and Demi and Mark and Chris. One of these teams will be eliminated.