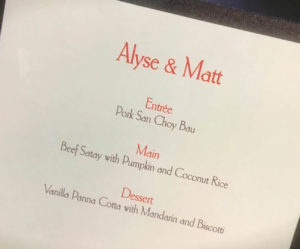 Alyse and Matt cook off tonight in MKR Instant Restaurant. What will their score be? Can they stay off the bottom of the MKR Leaderboard? We are about to find out! The couple from QLD are cooking an Asian menu in their restaurant “Birdcage”.

For entree, Alyse and Matt are cooking a Pork San Choy Bau recipe. Main course is Beef Satay with Pumpkin and Coconut Rice. Finally, for dessert, they are cooking Vanilla Panna Cotta with Mandarin and Biscotti.

Matt is cooking the San Choy Bau while Alyse is shaping the lettuce. While they are cooking Josh, Della and Tully have it out over uncooked quail and badly made seafood. Josh rudely says he was “talking to Della”. They are definitely not friends.

Alyse and Matt bring out their entree. Pete reviews it first, he says its a simple stir fry, pretty hard to stuff up. He says he really enjoyed the dish, there was not a lot to fault, it was a “very strong entree”. Manu disagrees with Pete, his was a little dry, he needed more sauce. He said it was good, but could have been better.

Alyse and Matt return to the kitchen to get the main ready. They decide to use a pre-made red curry paste for the dish. Pete enters the kitchen and asks them about it, he isn’t too happy. Alyse and Matt finish the main course and bring it out to the judges. Manu is first to comment. He is dumbfounded by the Satay sauce, he says “its not even a satay sauce, there is nothing even satay about this”. Manu was a bit let down. Pete said there was something he was not happy about when he visited the kitchen, he asked Alyse and Matt to go and get it from the kitchen. They bring out the store bought red curry paste. Pete asks why? They say it was because of time. Pete says they delivered their entree and main quicker than other contestants
the rice is inconsistent, the beef is overcooked and tough and they expect the contestants to cook from the heart, not from a jar. This is what the promo was hinting at was cheating. Josh and Amy say it is cheating and it is an instant 0 from him.

Alyse and Matt are upset, but get back into the kitchen for dessert.

The contestants discuss the curry paste around the table. Josh wants to see them penalised, hoping he will be lifted off the bottom of the MKR leaderboard.

Manu is the first to comment, he says he knows the simplicity of the dish. He likes the mandarine and says its done well. Pete says he really enjoyed it, it was the first time he has had mandarine with Panna Cotta, he said it looked like a restaurant dessert when it came to the table and it was the high point of the dinner tonight.

Its time for the teams to score.

This places Alyse and Matt second last on the MKR Leaderboard They will be cooking off against Josh and Amy in a sudden death elimination.