It has been an intense season, but Tasia and Gracia have sailed through almost unscathed. Their asian heritage has played a big part in their dishes, will we see them cook to their strengths tonight, or try something new? Carmine and Lauren, however, have been in countless elimination battles and have managed to succeed each time. Will this make them the MKR winners tonight?

The teams have to cook a five dish menu that will tasted by the guest chefs.

For first course, Tasia and Gracia are making seared scallop with betel leaves and Carmine and Lauren are making beef carpaccio with porcini cream. It’s a great first course, who will be the winner? 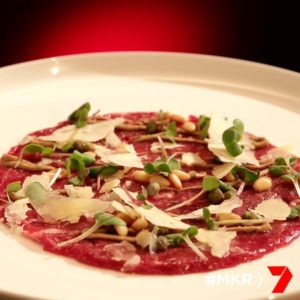 First to be tasted was Carmine and Lauren’s beef carpaccio with porcini cream. Liz said because they are having five courses, it is a well planned light dish. Karen says the beef has a good earthy flavour. Guy also said it was clever for a five course dish.

Next is Tasia and Gracia’s seared scallop with betel leaves. Colin says there’s a bit of kick in it. Guy says its one of those dishes that go “bang” to prepare them for the next courses. Colin says it was sweet, salty, they nailed it, he ate the whole thing. Karen says it’s utterly delicious.

It’s on to course 2. Carmine and Lauren are making Milk Braised Pork Belly with Scallop and Apple. Tasia and Gracia are making Chicken Ribs with Chilli and Sweet Soy.

Lauren gets straight on to blitzing their cherries for another course. They start on the apple and fennel salad and take the pork belly out of the oven. It doesn’t have any crackling, the skin is soft. they put it in a pan and fry it to get the skin to crackle. Tasia and Gracia are flying through their dish. Time goes fast, they’ve only had 30 minutes and they need to plate up. Both teams get their dishes on the plate. What will the MKR Grand Final scores be? Who will win? Let’s get onto the scores for this course. 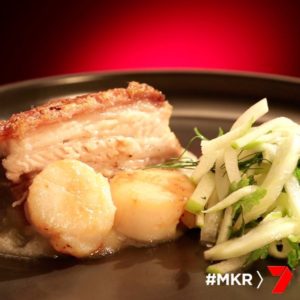 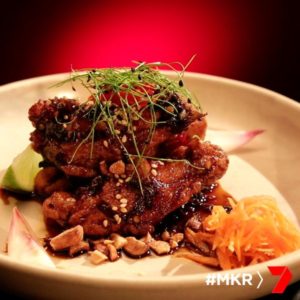 The judges taste Lauren and Carmine’s scallops and pork first. Guy says the highlight of the dish is the pork crackle and the apple. Colin says its a very well balanced dish. Liz enjoyed the lovely fresh apple salad. Next they taste Tasia and Gracia’s dish of chicken ribs. Karen says the chicken was cooked really well and the sauce was spot on. Liz says a clever use of spices and great balance. Colin doesn’t think it’s as strong as their first course.

The teams get back in to the kitchen to commence cooking the next course. Carmine and Lauren are cooking saffron linguini. Tasia and Gracia are cooking a prawn dish. The teams are struggling to plate up this round, Carmine is taking his time getting the pasta onto the plate. Gracia is stuck peeling quail eggs and tells Tasia to plate up alone. Gracia finally gets  the eggs done but Lauren and Carmine are still plating up with a minute remaining. Tasia and Gracia seem trhilled with their dish and Lauren and Carmine seem pretty happy as well. 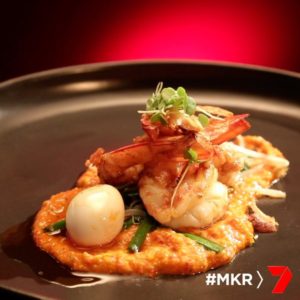 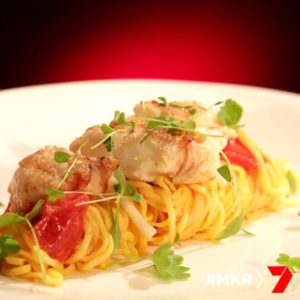 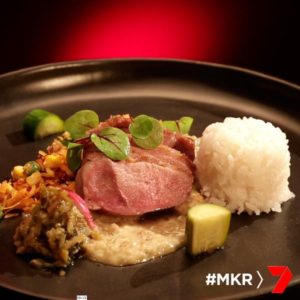 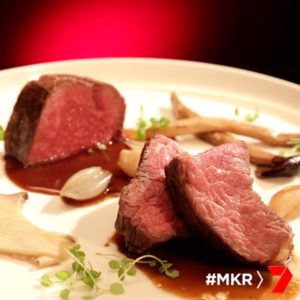 First dish to be tasted is Tasia and Gracia’s duck. Liz says “what an amazing dish”, there is no fat, only rendered crispy skin. Karen says the flavours are outstanding. It is another uniquely flavoured course. Guy says it is one of the most perfect dishes they have seen so far.

Next is Carmine and Lauren’s bee dish. Karen says it is a “stunning piece of beef”. Colin says they’re a very confident team to give you a piece of meat, some mushrooms and some sauce. Manu says it’s restaurant quality and Pete says it’s perfect.

It is down to dessert. Who will be the MKR Grand final winner? Tasia and Gracia are making a pandan pudding topped with raspberries, tapioca, freeze dried raspberries, edible flowers and coconut. Lauren and Carmine are making a chocolate, cherry and coconut dessert, she says to make it like a cherry ripe bar. It’s her own creation. Tasia and Gracia are arguing again about how many raspberries to put on the dish. Carmine is taking the chocolate domes out of the moulds. Both teams assemble their desserts. That’s it, they’re done! They’ve completed their final dish in the MKR finals. 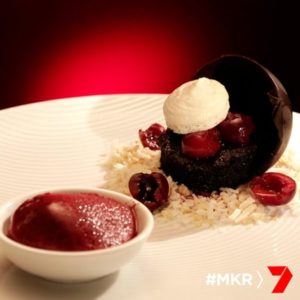 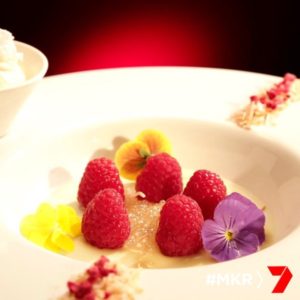 First dish to be tasted is Tasia and Gracia’s Pandan Pudding. Colin said he didn’t know what to expect with this dessert, but it was a great finish to the meal. Karen says it is sublime. Manu says the ice cream is fantastic, a beautiful way to finish a meal. Next is Carmine and Lauren’s chocolate dish. Liz says it is extraordinary, Manu loves the macaroon. Guy says thank goodness for the sorbet, the dessert is rich and it cuts through it.

It’s time for the scores and to unveil the winner of My Kitchen Rules 2016.

Tasia and Gracia have won MKR 2016