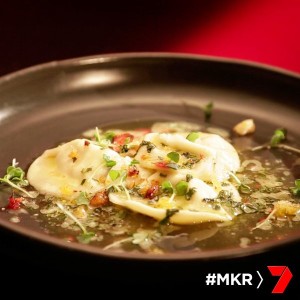 Tonight we have a sudden death elimination. It’s Gianni and Zana against Rosie and Paige. Both teams will need to cook a three course meal that will be served to the judges for a blind tasting. Who will be the stronger team tonight?

Rosie and Paige will be cooking for entree ricotta, lemon and mint ravioli. For main they are cooking meatballs with mozzarella and homemade bread and for dessert its lemon yoghurt cake with cherries and creme fraiche ice cream.

Gianni and Zana will be cooking for entree stuffed zucchini flowers with a tomato and oregano salsa. For main they are cooking a braised oxtail with jerusalem artichoke puree and horse radish cream. For dessert they are making a salted caramel tiramisu.

Gianni is making the salted caramel sauce for the tiramisu. Zana is working on the stuffed zucchini flowers. Rosie and Paige are preparing their pasta for the ravioli. They seem a bit flustered and Paige is having trouble with the pasta machine. The pasta is looking dry. She tries again and it works a little better this time. Zana is pressuring Gianni to get started on the salsa but he is busy preparing the ingredients for the tiramisu. Zana is busily cooking the zucchini flowers in the deep fryer.

Rosie and Paige are assembling their ravioli. Paige puts the ravioli into a pot of boiling water. Gianni finally gets started on the salsa much to the relief of Zana. Rosie takes out lemon yoghurt cakes out of the oven. Time is running out and the contestants get prepared to plate up. Rosie and Paige suddenly realise they do have not enough ravioli. They very very quickly attempt to roll out some more. Both teams get their dishes on the plate on time. 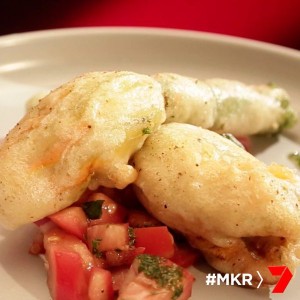 It’s time for the judges to taste the entrees. The first dish to be tasted belongs to Rosie and Paige. Liz says it’s really really delicious and is beautifully seasoned. Colin likes the simplicity of the dish and says the pasta is cooked very well. Manu says it ticks all of the boxes for him. Guy says it is refined elegance.

Next up it’s Gianni and Zana’s dish. Karen says the zucchini flowers are glorious but she would have liked some more refinement with tomato underneath. Liz agrees with Karen and says the tomato and onion are too chunky and the garlic is overpowering. Pete agrees.

Gianni is cooking the radicchio but it’s burning too much. Rosie and Paige’s homemade bread has not worked out and they are not going to use it.

The teams start plating their dishes up. Gianni and Zana are trying to modernise a rustic dish with their plating up. Rosie and Paige are attempting to salvage their bread and decide to serve it anyways.

It’s time for the judges to taste the main course. The judges are surprised to see that Rosie and Paige’s meatball dish is really just only one large meatball. 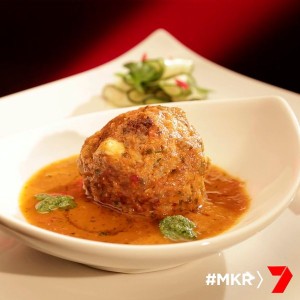 Karen said it was a “very large meatball” and questions whether it is a sudden death dish. Guy agrees, maybe more smaller meatballs, but its a punchy main course. Liz isn’t sure the cold zucchini goes with it, she enjoyed the meatballs but is not sure it’s a cohesive dish. Pete thinks the bread is a let down and doesn’t belong on the plate, he says it’s like two diff teams cooked the entree to the dessert.

Zana and Gianni’s dish is next. Karen likes it, they have braised the ox tail perfectly, the sauce adds an elegance to the dish. Liz says “it’s good”. Colin says it’s his type of meat, using offcuts, it’s half rustic, half “cheffy”. Guy says the meat has been cooked well. Manu said the ox tail is just holding on the bone, it’s quite beautiful. Pete says he would much rather the ox tail over the meatballs, which is the opposite of the entree. Who will be eliminated from MKR tonight? We have a battle on our hands.

It’s on to desserts, cake vs tiramisu. Gianni tries to make the caramel balls, but they aren’t working, they’re just dripping everywhere. 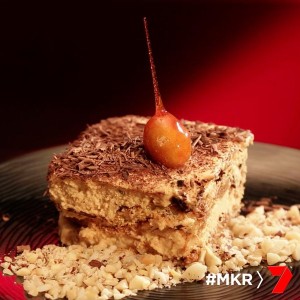 Gianni is spending a lot of time on his caramel balls, apart from that, both teams seem to be doing pretty well on dessert. Rose and Paige get their cakes out, they look good. Their cherries are good, will their ice cream come out?

They teams start plating up. Gianni and Zana’s dish looks really impressive, the caramel balls come out good, they lay their tiramisu on crushed nuts and put the caramel ball on top. Rosie and paige sprinkle some cherries next to their cake, they take the ice cream out in the last minute. Both teams are done.

The judges sit down to taste them. First is Rosie and Paige’s lemon yoghurt cake. Karen said when she heard the title of the dessert she thought of a classic combination but the cake was bordering on a muffin consistency. Guy likes the ice cream and the cherries “are the bomb”. Manu also liked the ice cream and cherries but it’s not a dessert you want to finish a three course meal with, it’s more like an afternoon tea. Are Rosie and Paige about to be eliminated?

Next is Gianni and Zana’s salted caramel tirimsu. MKR don’t show the judges comments for this dish until the scores are revealed. Liz said the dish looked “so playful on the plate” but wasn’t too sure about a salted caramel version of tiramisu. Guy said it it was beautiful, the balance of flavours were good. Colin said it was a good finish to the meal.

Rosie and Paige have been eliminated from My Kitchen Rules 2016 tonight.