Tonight is Rosie and Paige’s My Kitchen Rules Instant Restaurant. The best mates from South Australia have to score more than 31 to stay in the competition. Their restaurant was called Big Love Grub. 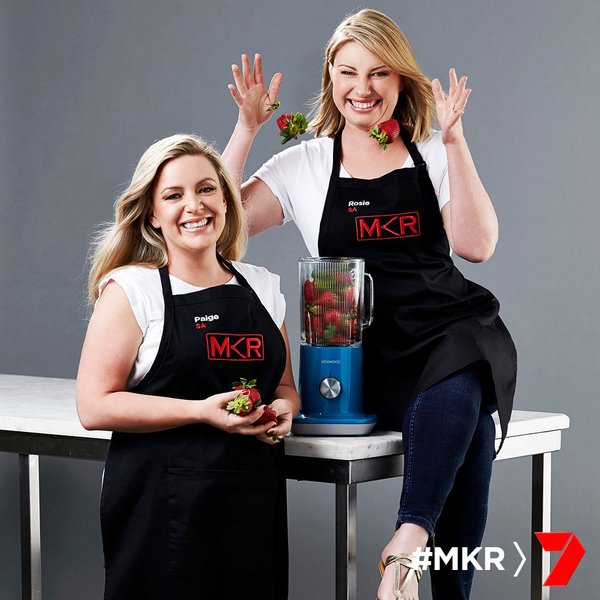 For entree, Rosie and Paige are making a lamb backstrap with picked beetroot and chive crème fraîche recipe. Main course is a chicken leek and zuchini pie with mushy minty peas. Finally, for dessert, the two were making grandma’s ginger bread with a rum and raisin ice cream.

Rosie and Paige hand made their sign, but unfortunately it started falling apart when they went to hang it. It was a bad omen for the rest of the night, but they managed to fix it. They only had 2 hours and 8 minutes to prep and start cooking.

The guests arrived, Rosie and Paige showed them to the table and gave everyone a pair of slippers chosen to suite them and a pen and pad to write some poetry. They went back to the kitchen to get the entree done. Pete and Manu arrived and Cheryl felt bad about her instant restaurant results, like she had insulted them.

The menu was revealed to the guests. They said the entree had to be perfect as it was so simple. The lamb couldn’t be overcooked. They pan fried it and put it in the oven for a bit. They took it out, left it to rest and when they cut into it, it was perfect. They plated it up, Paige said “some of them look a bit crap”, but they weren’t too bad.

First to comment on the entree was Pete. He said he was looking for fun, full of flavour meal. He said there was no “wow” on the plate. The dish lacked seasoning. Manu thought they had worried too much about how it looked rather than the taste. It was a good dish, but needed improvement.

Rosie and Paige started on their pies. The pastry rolled out perfectly when Paige realises that they have not made enough pastry to do the top, bottom and sides of twelve pies. They decide to put their pies in ramekins and then cover the pie with a pastry lid. The girls put a test pie in the oven and when they go and check on it the pastry lid has collapsed. In the meantime, the other contestants at the table have been waiting for over an hour and they are hungry. The pies finally go into the oven. The carrots boil over on the stove but have gone to mush so they will not be serving them. They are worried that it is going to look like there’s nothing on the plate. The girls are starting to get stressed as they realise the other contestants have been waiting for so long. 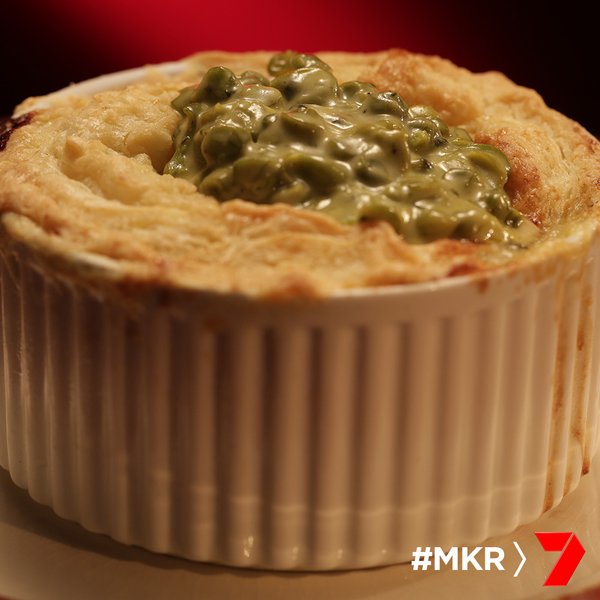 The pies finally get served. The hungry contestants are excited as the pie looks big. The judges taste the pie. Manu says he was excited when he saw the pie and he was very happy with the pastry. He said the filling was chopped up too small and he likes chunks in a pie. He was expecting perfection after waiting for two hours for his pie. Pete says the peas were too salty and the filling wasn’t bad but it tasted too much like white wine. He says they need to pay more attention to detail. The other contestants enjoy the pie. Zana said it had no wow factor and Cheryl said it’s just a pie, it’s not a restaurant dish.

It’s time for the final course to be prepared. The girls are making Grandma’s gingerbread. They check on their rum and raisin ice-cream but it has not set fully. They decide to plate it up anyways. The contestants are quite disappointed with the overall look of the dessert. Manu and Pete taste the dish. Pete says he enjoyed the cake but did not taste the spices. Manu says the ice-cream was a failure as there was no rum or raisin flavour, it was vanilla ice-cream with raisins in it. The other contestants get to taste the dish. They enjoyed it but all agreed that there was no rum flavour in the ice-cream at all. Zana said it was just a simple cake and she could not taste all the spices in it. Some contestants say that there was little difference in the performance of Cheryl and Matt and Rosie and Paige.

It’s time for the contestants to score the dishes.