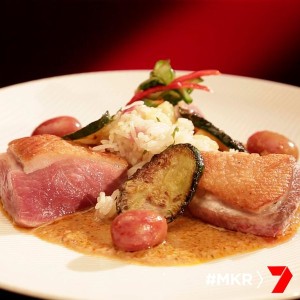 The past contestants are WIll and Steve, Rob and Lyndzey, Ash and Camilla, Sophia and Jen, Chloe and Kelly, Helena and Vicki, Carlie and Tresne, Angela and Melina, Nick and Rocco and Dan and Steph.

The teams had to decide who was cooking mains, and who were cooking desserts.

Carmine and Lauren need to develop a lot of flavour in her broth, usually it would take hours but she only has 90 minutes. She quickly gets her veggies and quail bones in a pressure cooker.

Meanwhile, Mike and Tarq need to get their curry spot on. They state that they’ve cooked a lot of curries in their time. When they are adding tamarin paste, they add too much and have to figure out how to balance it out, they add some more lime juice and grapes to add a bit of sweet and sour flavour. 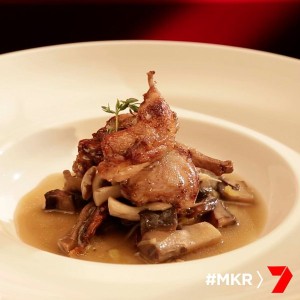 Carmine is deboning the quail. Time passes quickly, with 30 minutes to go, Lauren drains the stock through a muslin, burning her fingers, adds some mushrooms to the broth and continues reducing it. Tarq starts cooking the duck breast. They pan sear the duck to render the fat then put it in the oven. Carmine starts cooking 80 portions of quail, it’s going to be tricky.

Tarq take out his duck, with 10 minutes to go he cuts it, it’s still raw, it needs to go back in the oven. It comes out ok eventually.

The teams start plating up, Mike and Tarq are going crazy, their plating isn’t working. It’s frantic, Carmine and Lauren are throwing their mushrooms in bowls, placing the quail on top. Carmine notices the quail is a bit inconsistent, but there’s nothing he can do about it. It’s down to the last 10 seconds, the teams wipe down their plates and time is up.

It’s judging time. They join Pete and Manu at the tasting table. They taste Carmine and Lauren’s dish first. The teams like the broth. Some of the teams got dry quail breast.

The pan seared duck breast was next. The duck is undercooked and the teams didn’t like the sauce. One of the contestants commented that the duck was the worst thing they had put in their mouth.

Chris makes the chocolate soil, he takes it out of the oven to show Cookie but spills it on the bench. Luckily, he has enough to keep going, there is no time to make more. They make their tacos, but they have to make them individually and cook them individually, it is a lot of work.

Jason is making the pickled orange, he puts some white balsamic vinegar in the water to give it a bit of a pickled flavour. Eve says its like their favourite things, salt and vinegar chips, but with oranges and crepes.

Chris takes out the choux pastry, the past contestants comment that it looks like something out of shrek. 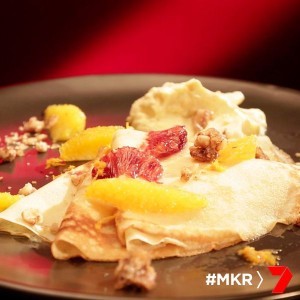 It’s plating time. Chris and Cookie start assembling their tacos, they put the hot strawberry salsa on but it is making the taco soggy. they top it with the white chocolate cheese which melts nicely on top. Eve and Jason start putting together their crepes, there is nowhere to hide in such a simple dish, so it has to be spot on. Both teams plate up in time.

The judges and past contestants taste Chris and Cookie’s taco first. They are all wowed by the look of the taco, it looks really good. Ash and Camilla think the taco is a bit random. The other contestants can appreciate the amount of work that went into the dish but the elements didn’t work well together.

Eve and Jason’s crepe was next to be tasted. The contestants say it’s a bit rubbery and quite sour. The walnuts taste good, but the rest of the dish wasn’t perfect. The crepes were too dense and the sauce wasn’t sweet. This dish was too simple and not good enough.

The past contestants now have to score each dish and the lowest will go into sudden death elimination.

It is Eve and Jason vs Mike and Tarq in tomorrow’s sudden death elimination.