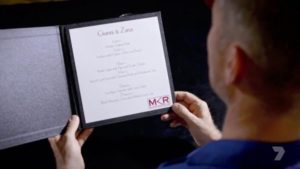 It is the last ultimate instant restaurant tonight on My Kitchen Rules. Can Gianni and Zana stay in the competition? They have to beat Mitch and Laura’s score of 60.

For entree, Gianni and Zana are making adriatic seafood stew and sardines with capers olives and bread.

For main, they are making burek cigars with figs and goat’s cheese and spiced lamb loin with chestnut puree and mushroom tart.

They head off to the seafood shop and then to Coles. When they get back, they set up their restaurant ‘Monte Nero’. They are right on time, having only burnt through one minute of prep time. They get their stock on for their jus and prepare their tart base for main. They then get on to making the filo pastry for their mains. They smash it out and the guests arrive. 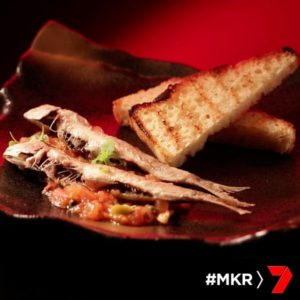 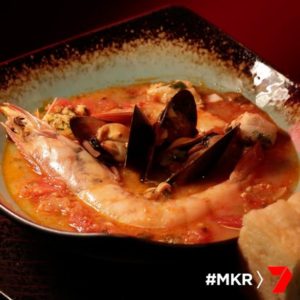 They start making the bread for one of their dishes when the judges arrive. They are seated and their on to getting the entrees out to their guests. The sardines are cooked with the bones included, apparently they eat the bones in Montenegro. Gianni starts the stew, he adds the prawns first, then mussels. They have no backup seafood, so they have to get them right.

They take the prawns out, Gianni thinks they are cooked, but Zana disagrees. They were going to serve them whole, so they can’t peel them to check. Zana want’s to peel one to check that they’re cooked but Gianni is confident that they are fine. They start plating up and take their dishes out to the judges.

Pete and Manu taste their dishes. Pete has the seafood stew and Manu has the sardines. Pete tastes his stew and peels his prawn. He asks Gianni and Zana how they expect him to eat the prawn, they reply that he could chop it up or eat in with their hands like they would. Pete pulls at the prawn and asks if it’s been cleaned and deveined and Zana replies no. Manu says the dish altogether was wonderful and he loved it but he says the dish is missing a good amount of salt. He thinks the fish wasn’t seasoned at all and neither was the sauce. Pete says the guests and himself are all dressed really nicely but do they expect the guests to peel messy prawns in their nice outfits. He also questioned why the prawn was not cleaned. The dish did not have enough salt. The dish overall was sensational and was a strong dish. The other guests taste their meals. Anna really enjoyed the stew and Lauren said it was the yummiest seafood she’s ever had. Laura doesn’t like her seafood dish and she didn’t like the salsa, she says it was dry. 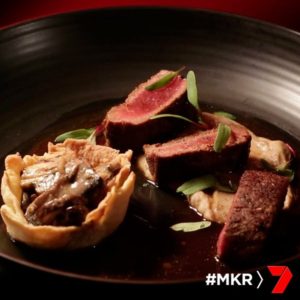 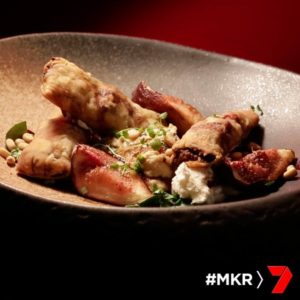 Pete and Manu taste their dishes. Pete has the burek and Manu has the lamb. Pete says the burek was dry but the goats cheese and figs were nice but the hommus was dry too. It was an average dish. Manu says he absolutely loved the dish, he cannot fault it. The lamb was beautifully cooked, the chestnut puree was great and he loved the jus. The other contestants taste their meals. Lauren loves the jus and says it’s the nicest sauce she’s had in the competition. Jordan agreed with the judges that the burek was dry. Laura did not like her lamb but struggled with her words to find reasons why she didn’t like it.

Gianni and Zana get back into the kitchen to finalise their desserts. Zana is working on the syrup and Gianni is preparing the chocolate for the cake. Zana plates up her tesphixe and Gianni takes his lava cakes out of the oven. They turn the ramekins upside down to see if the lava cakes come out. They come out perfectly and are quickly taken out to the guests. 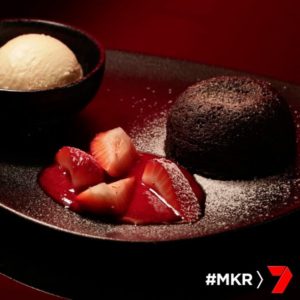 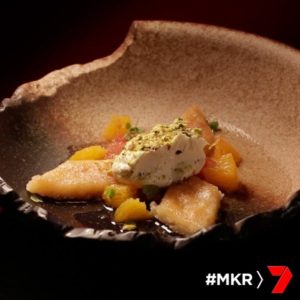 Pete and Manu taste their dishes. Manu has the tesphixe and Pete has the chocolate lava cake. Pete says it didn’t have a lot of lava but it was lovely and moist and rich. It was a great dessert, the strongest tonight. Manu says he doesn’t want to hurt anyone’s feelings but he didn’t really enjoy the dish. The pastry was dry but not sweet enough, the citrus salad was ok but the cream was flavourless. He just didn’t enjoy it. Anna and Jordan also did not like their dish. Laura says her dish was tasty but there was no lava. Pete asks her if she thinks she is in with a chance and she replies she thinks so.

Mitch and Laura have been eliminated from My Kitchen Rules. Gianni and Zana are safe and through to the semi-finals.