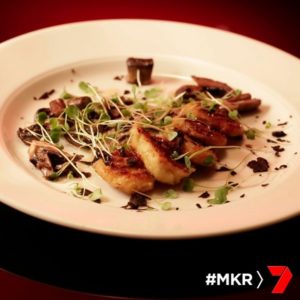 It is Anna and Jordan’s My Kitchen Rules Ultimate Instant Restaurant Round tonight. Their restaurant, Mama Knows Best, is back, can they get themselves to the top of the leaderboard? Here are the recipes they are cooking tonight.

For entree there is gnocchi with musroom and truffle and squid with almond tarator and citrus salsa.

For main they are making black and white crab ravioli with crab bisque and suckling pig with celeriac and apple.

Finally, for dessert, Anna and Jordan are making rhubarb and ginger bombe alaska and vanilla panna cotta with espresso jelly and crostoli.

Luckily, Anna and Jordan have a commercial oven, so they are able to cook a whole pig. They go to the butcher and pick up their meat, then to Coles to get the rest of the ingredients. Once they get back, they get right into it. Suckling pig quickly seasoned and put in the oven, the gnocchi, the panna cotta and espresso jelly all before the guests arrive.

After seating the guests, they get back to cooking. Their gnocchi is done and ready to cook. Shortly after, Pete and Manu arrive.

They get on to the bomb alaska and parts of the main course. Anna is working on the squid. Jordan makes the spice mix and they argue a bit about how to cook the squid, but forget that their gnocchi is in pan frying. 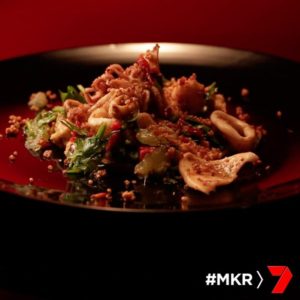 Anna says they’re fine, Jordan is worried they’re cooking down too much. Jordan delicately flips them, they’re breaking up a bit. There are arguments in the kitchen, they aren’t working as a team. Jordan starts plating the desserts. It’s out to be judged.

Manu gets the gnocchi and Pete gets the squid. Manu is first to comment. He says there was a bit of bickering in the kitchen and the team needs to be working together. He says there is a lot of flavour in the entree. The gnocchi caramelisation was good, but the recipe was wrong. It tasted good, but it was more like a fried potato.

Pete said his squid was cooked perfectly and the flavours of the dish were good, great citrus flavour. The tarator was good, but a bit “pasty”.

Anna and Jordan get straight back in the kitchen. They roll out their ravioli. The pasta looks great, it has streaks of white pasta and squid-ink-black pasta, creating a stripped affect. They also take the pig out of the large commercial oven out the back. It’s looking good.

Anna is working on the crab bisque, Jordan is getting the sauce from the pig’s tray. It’s very salty, he decides to reduce it with the left over juice from the celeriac and apple. They start plating up. Jordan pulls pieces of the pig from different sections and places it in a pile on the plate. It is very “rustic”. Giani and Zana comment that they don’t know how they made the strips. 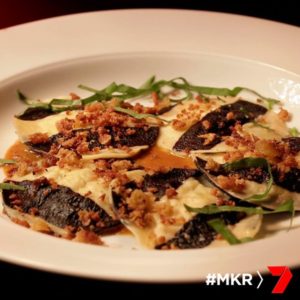 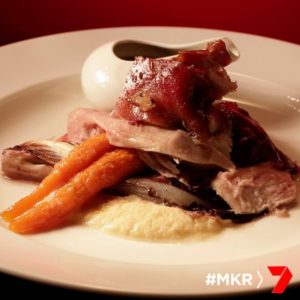 Manu has the ravioli and Pete has the pork. Pete comments first. He says they took a huge risk cooking a suckling pig. Pete adored the dish, he said it wasn’t a pretty dish but it was a bloody good dish. Manu loves the look of his pasta and can see that they are pushing themselves. The filling was nice and juicy and full of flavour and the pasta is well cooked. The bisque is thick but the flavours of all the ingredients are magical. The other guests taste their dishes. Tasia and Gracia are enjoying their cracking. Lauren and Carmine are enjoying their bisque. Zana says the dish is a little bit rich. Laura said there was too much pork on the dish. The other contestants think she is being overly critical tonight. 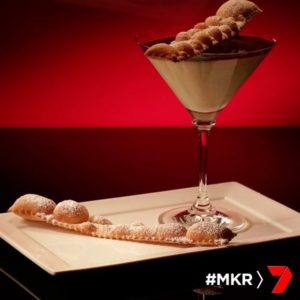 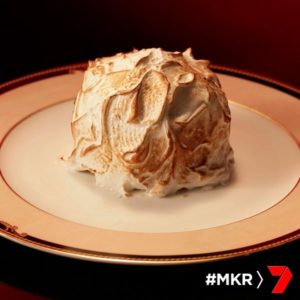 This puts them third on the MKR Ultimate Instant Restaurant Round Leaderboard.