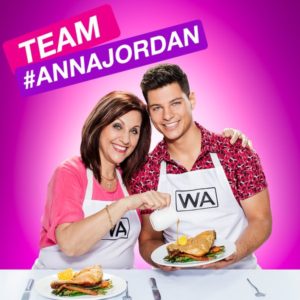 It is the My Kitchen Rules semi final 2 with Anna and Jordan cooking off against Carmine and Lauren for a place in the MKR Grand Final. Who will win?

Carmine and Lauren are very determined to win, after three sudden death challenges they are still in the competition.

What are they cooking tonight?

Carmine and Lauren are making seared scallops with pea cream and speck for entree, sous vide chicken with smoked potato puree and brussel sprouts for main and grilled peach with yoghurt mousse and peach sorbet for dessert.

Anna and Jordan are making lightly poached oysters with fennel and apples for entree, chilli angel hair pasta with crab and pippies for main and cannoli with orange and marscapone ice cream for dessert.

The teams have 1 1/2 hours until entree must be served. Jordan straight off the bat makes the marscapone ice cream, Carmine gets on to the sous vide chicken.

Lauren gets onto their stock and Anna starts on the mousse for dessert.

Jordan starts on the jus for the poached oysters, while anna makes the cannoli. Jordan wants his mum to start on the pasta for main, but she disagrees. She gets a few cannoli done and Jordan convinces her to get onto the pasta.

With 17 minutes to go, Carmine and Lauren are doing well for time. Anna and Jordan are struggling for time though. They’re rushing to get all the elements done. Anna helps plating up. Their dish doesn’t look great. Carmine and Lauren’s however looks good. They both get the plated on time. 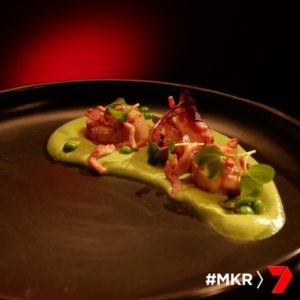 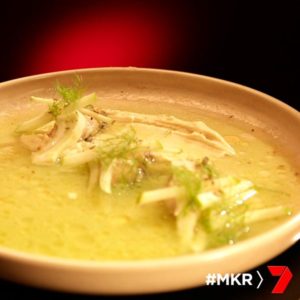 First to be tasted is Carmine and Lauren’s seared scallops. Liz says it looks gorgeous on the plate, very vibrant and inviting and everything was well done. Colin says it’s good cooking, but it’s playing it safe. Pete says it’s old school, classic and done well.

Next is Anna and Jordan’s dish. Pete says “it’s an interesting looking dish isn’t it”. Liz got some shell in her dish. Karen says she commends the team on their creativity, but it’s not a great dish. Colin says the cream is muddling the juice. Liz finds the cream unpleasant. Manu doesn’t mind the juice and the oysters are cooked well, but the cream is far to dense.

The teams get back into the kitchen to prepare their main dishes. Carmine removes the chicken from the hot water sous vide and starts peeling the peaches for the sorbet. Jordan is picking the crab meat for the pasta. Anna removes the crab claws from the oven but they’re not ready so she puts them back in. Lauren gets the sorbet mix into the churner. Then she starts reducing the jus in several pans. Anna and Jordan are not working super fast and Tasia and Gracia are worried they are going to run out of time. Lauren deep fries some potatoes for crunch and Carmine smokes some potatoes over wood chips. Jordan is rolling out the pasta sheets and is making the angel hair pasta. Carmine puts the chicken into a pan to make the skin crispy. Jordan starts getting worried that they will run out of time. Jordan cooks the pasta and Anna is happy with how it looks. There’s 7 minutes left on the clock. Carmine has forgotten to char the brussel sprouts. Anna and Jordan coat the pasta in the oil and chilli. Both teams start plating up. Anna and Jordan are quite disappointed that their dish looks so messy. Both teams get their dishes onto the plates and it is taken out to the judges. 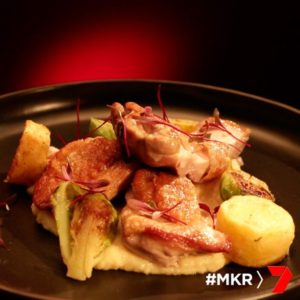 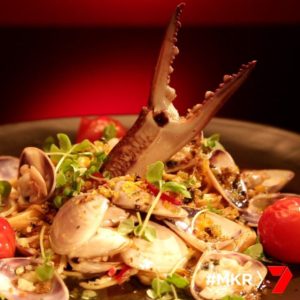 The judges taste Lauren and Carmine’s chicken dish first. They are impressed with the jus. Karen thinks its a simple dish but the chicken is melt in your mouth and tender. Guy says the dish has taken a lot of work. Colin says there are too many potatoes. Manu says the sauce is beautiful, one of the best. Pete says the brussel sprouts are a little undercooked but the rest of the dish is good. Next they taste Anna and Jordan’s dish. Guy says it has some nice flavours in there and it is tasty. Karen says the dishes are a little inconsistent around the table.

It’s not looking good for Anna and Jordan, they will need a 10/10 dessert to stay in the competition. It looks like Carmine and Lauren will win My Kitchen Rules tonight.

It is on to dessert. Carmine and Lauren scoop their sorbet into ramekins and into the freezer to get it to freeze. Carmine accidentally drops the rest of the sorbet into the bin, it’s lucky they have enough spare. Meanwhile, Anna and Jordan get their cannolis on. They already have their cannoli shells done, so they just have to fill them and get their other elements on the plate. They also get onto making a praline. They pour it over some nuts and put it in the freezer to harden.

Carmine puts his peach halves into the pan with sugar to cook. Jordan takes the praline out but it’s not set, they blitz it anyway. It’s not crunchy, they decide not to serve it. Anna is going to make a ganache instead. Meanwhile, Carmine and Lauren take their crumb out of the oven. They put it on the plate and place the yoghurt mousse on top, it’s melting. It is a mad rush for both teams to plate up. They all get their elements on the plates. It’s the final judging for the night. 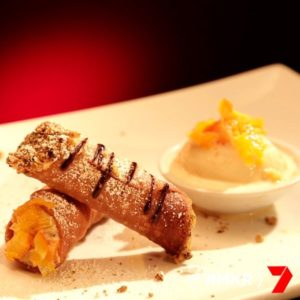 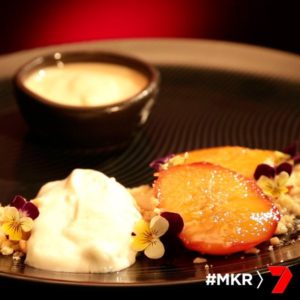 First to be tasted is Carmine and Lauren’s grilled peach. Colin says the peach sings of summer to him, he loved the texture of the nuts and the salt and the yoghurt cuts through the sweetness. Karen agrees, she says there is great technique through all three dishes.

Next is Anna and Jordan’s cannoli. Guy says “who doesn’t like a cannoli”. He says it is a really refined cannoli. Karen says the pastry is textbook perfect. Liz liked the way that they have been dipped in different ends. Manu says it is the best dish of the evening.

Anna and Jordan have been eliminated from MKR tonight. Carmine and Lauren win the semi final tonight and will compete against Tasia and Gracia in the My Kitchen Rules Grand Final