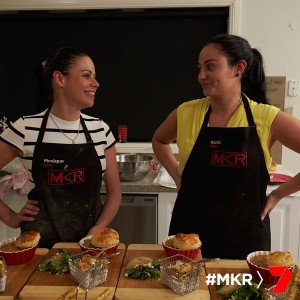 They do their shopping and get back quickly. They start on the soup and the creme anglaise for the profiteroles. They’re cautious not to make the same mistakes as last time. The creme anglaise is put in the ice cream maker and Monique gets on with the puff pastry for the rabbit pie. Everything tonight is being cooked from scratch.

For the pea and ham soup, they are using split peas. They get them on the stove with the ham hock to break down. Meanwhile, Monique is still working on the puff pastry. Once that is done, she moves on to deboning the rabbit.

The guests arrive and are warmly greeted and all return the warm greeting with the exception of Lauren and Carmine. The girls described their greeting as somewhat cold. 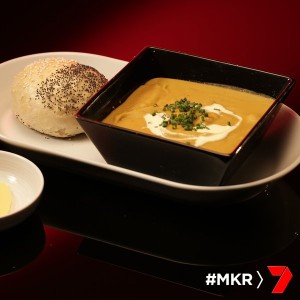 The guests are welcomed to “Crime and Nourishment”. The girls get back into the kitchen to work on their rabbit pies. Sarah is rolling the dough for the bread rolls and she is happy with how they are looking. The judges arrive. The menu is revealed and the guests are excited as it sounds like tasty home style food.

Pete and Manu taste the soup. The soup looks very thick. Pete says the meal did not wow him. He struggled to find any pea flavour in there, he felt like he was eating pumpkin soup. Manu said the texture of the split peas is missing. He said it was destroyed but blending it up and the ham hock chunks were too big. Pete says the bread roll on the side was good. Unfortunately the soup was underwhelming. The guests taste the soup. Someone comments that it tastes like pumpkin soup with ham. Lauren says she did not like it, it was dry and the ham was quite chunky.

Monique and Sarah are upset with their bad critique. Monique begins to debone the rabbit but comments on the huge amount of tiny little bones. Monique is working on the choux pastry but it looks runnier than usual. She wonders whether she should make another batch. She decides to make a second batch. The second batch looks much better. 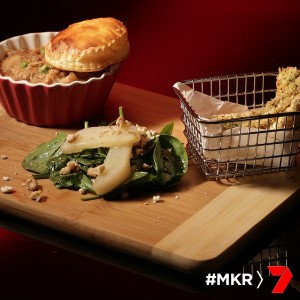 Sarah puts the rabbit pie mix back on the stove but she is not confident that there are no bones in it. She then gets on to making some eggplant chips.

Its an hour and 30 minutes since entree. The girls realise they have a problem. They have no room for the eggplant chips in the oven. They ware wondering if they should make the chips or not.

The puff pastry hasn’t really worked out quite as they had hoped. They guests have now waited two hours for their food since entree. The girls decide to make the eggplant chips and plate up the dish.

They take their food out to the judges. Pete and Manu taste the dish. Pete says he thought it was delightful, a lovely main course.

The rabbit was cooked well and the pastry was well made. He liked the crispy chips on the outside and the soft centre.

Manu also liked the dish although he said the pie’s flavour was missing a little. A few guests have gotten mouthfuls of bones. 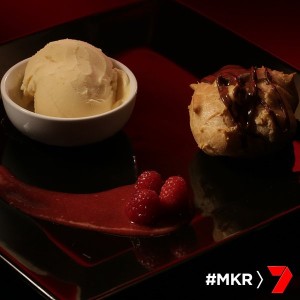 The girls get back into the kitchen to finalise their dessert. Sarah begins the raspberry coulis. Monique makes a custard. She then gets on to making a ganache but it has split.

Then she slices open her hand with a knife while chopping up some chocolate. The second lot of ganache works well. They fill the pastry cases with custard and plate up the dish.

They take the dessert out to the judges. Manu says it was a very generous profiterole and well done on the choux pastry. The only criticism is the custard in the middle which doesn’t quite taste right. Pete enjoyed the dish. The only negative he could say was the custard. It’s time for the other contestants to taste the dish. Most of the other contestants really enjoyed the dish with the exception of Lauren said that the custard she makes is much much better.

Grand total score 62/110. The score places them second just under Nev and Kel on the MKR redemption round scoreboard.