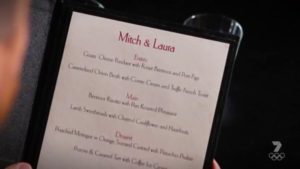 It is Mitch and Laura’s ultimate instant restaurant round. It is the My Kitchen Rules finals and the team have to cook two entrees, mains and desserts. Here are their dishes. For entree they are making caramalised onion broth with french toast and a goats cheese fondant with roast beetroot and figs. For main they are making lamb sweetbread with charred caul and hazelnuts and beetroot risotto with pan roasted pheasant. Finally, for dessert they are making porcini and caramel tart with coffee ice cream and poached meringue in with orange scented custard and pistachio praline.

They get home and start cooking. They get the pheasant in the oven and start on the veggies. They start to work on the dessert but notice they have no cream. It is a disaster, Laura had to send Mitch back to the shop. They live quite far from the shops, he leaves with 2 and half hours to go. Laura is missing him, she’s trying to get his jobs done also. He finally gets back with 1 hour and 15 minutes left. Laura quickly gets the ice cream together and into the machine. Mitch starts on the brioche for the french toast in the main.

The guests arrive and get seated at the table. It is dressed with pine tree branches and moss. They are outdoors, Zana is not impressed.

Laura takes the brioche out of the oven to cool. Their onions have been caramelising for a while and they’re also looking good. Mitch cuts the brioche and covers it with an egg and truffle mix. Meanwhile, Laura adds egg white to the stock to get it to soak up all the impurities and create a clarified broth.

Mitch and Laura seat them and take the orders for the night. The guests are confused as to what sweet breads are. Mitch and Laura have a little bit of trouble getting their fondants out, but they take a lot of time plating it, hoping that the fondant is still soft inside when it comes out. It’s tasting time.

Pete gets the fondant, he cuts into it, but it doesn’t look soft inside. Pete says he thought it was “an absolutely lovely way to start the evening”. Although it wasn’t oozing out, the fondant had a good texture and was tasty. Manu had the caramelised onion broth, he says its like a french onion soup but with a twist. It was “fabulous”. He thought it was odd to serve it with such little broth, but it worked putting it in a glass on the side. A small criticism was that he would have pan fried the french toast, but it was a great dish. The other contestants agree. Gianni has a hair in his dish, Zana will forgive them this time, even though it’s not on her plate. Lauren “feels a bit ripped off” that there isn’t a magic show with their entree, unlike their previous instant restaurant.

It’s on to mains. Mitch is getting started on the pastry for the dessert. Laura is cooking the pheasant breast. Mitch is preparing the lamb sweet breads. Lauren is checking on her beetroot risotto. Laura takes the pheasant out of the oven and leaves them on the bench to rest. They start plating up their mains and get them ready to take out to their guests.

It’s time for Pete and Manu to taste their mains. Pete tastes the sweetbreads and Manu tastes the pheasant with beetroot risotto. Manu says the risotto is delicious but there are some faults, the risotto is a little undercooked. The pheasant should have some crispy skin, and without the skin the meat is dry. Pete says the sweet breads were a little dense, the cauliflower was sensational and the dish was good but the techniques weren’t quite right. The guests taste their dish. Zana got a hair in her dish and was devastated, she is a germaphobe and refuses to eat the rest of her dish.

It’s time to get back into the kitchen and get the desserts ready. Laura is adding a porcini cream to the caramel tart, it is definitely a strange dessert ingredient. She then gets started on the tart and puts the pastry into the oven. Mitch prepares the meringue and puts it into the oven. Laura is working on the caramel. Mitch takes the pastry out of the oven the pastry has all cracked. Laura decides to do a deconstructed tart as they cannot use the pastry shell as it is but they are both not happy about it. They plate up and take their dishes out to their guests.

Pete and Manu taste their dishes. Manu has the caramel tart and Pete has the meringue. Manu comments that the coffee ice-cream had a great coffee flavour. He wonders what happened to the rest of the dish. He says the caramel flavours are very sweet. The porcini mushroom flavour was very special he said and it makes sense. He says they haven’t really delivered on this dish. Pete says the meringue did not go wrong, it was not too sweet and was light and fluffy. The custard was not the right consistency though. The other guests tasted the dishes, Lauren says the custard tart was not custard and she can do much better. Zana finds another hair in her dish. She cannot believe her luck, how is it possible that she has gotten another hair, she is annoyed and disappointed.

It’s time to hear the scores of the judges and contestants.

One thought on “MKR Ultimate Instant Restaurant Round Mitch and Laura”