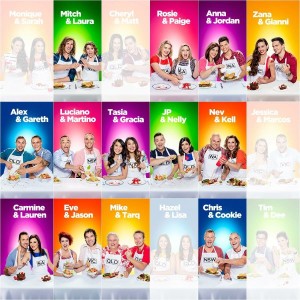 The MKR teams enter the My Kitchen Rules headquarters. They need to split into two teams, chosen by themselves for the first challenge.

The groups get into teams, white and black, and each team has  to come up with a dish to cook for the public. The winners will be safe for the next two eliminations.

The white team are making an Asian Buffet.

The black team is making a Mediterranean buffet.

From the start, Tasia and Gracia have issues with their pressure cooker for the lamb, they also have to make rice on a pot, they have only done it with rice cookers in the past so we will see how they go.

The judges taste all of the teams dishes and critique each one. The customers decide how much to pay for the buffet now and the team that makes the most money wins.

The judges get ready to announce the winners and losers and Nelly gets overwhelmed with emotion. The white team cooked an Asian style buffet. The judges said the menu looked good on the board. The judges enjoyed Anna and Jordan’s noodles. Eve and Jason cooked a Vietnamese rice salad. Colin asked what did they actually cook in the dish, they’ve just opened jars. Rosie and Paige had a good concept but the dish was disappointing and the duck was hard to find in the dish. Mitch and Laura made a red chicken curry and Pete said it was a sensational curry. Colin couldn’t fault the curry. Mike and Tarq make pork belly and Pete said it was crunchy on top but the cabbage had no flavour.

The black team cooked a Mediterranean style menu. JP and Nelly cooked chicken skewers and pumpkin. Although the chicken looked dry it was moist and had lots of flavour. Alex and Gareth cooked the filo cups with ricotta. Pete asked if they had tried it and they said they hadn’t. He said the cups were dry and empty. Carmine and Lauren cooked spinach and ricotta ritolo, Colin said it was bang on, seasoned, fresh and suitable for a buffer. Nev and Kell cooked crumb prawns, Pete asked where the sauce was. Tarsia and Gracia cooked Moroccan lamb and Pete said they nailed it, the lamb was just falling apart. Colin agreed that the dish was spot on.

The couple that cooks the dish of the day is safe for the next two eliminations. The winning dish belongs to Mitch and Laura who cooked the red chicken curry.

Who will be eliminated tomorrow at MKR’s headquarters?