Tonight’s MKR Elimination is JP & Nelly against Alex & Gareth. Who will be eliminated tonight? It is a cook off with three courses.

JP starts on the borsch and Nelly starts on the tart bases for dessert. Alex and Gareth start on both the main and dessert. It’s a frantic first course and rushed through quickly. Suddenly there is only 20 minutes left for entree and Nelly has forgotten the flatbread, while the boys haven’t started on anything for the entree. They get on it.

Gareth starts by slicing the sashimi. The other contestants comment on his good knife skills. Meanwhile, Alex is making the avocado puree. JP is making the cream sauce for the soup. There is 5 minutes to go and JP & Nelly frantically try to make their entree, the bread hasn’t cooked. They put it on the frypan and get the duck in the oven. Alex and Gareth start plating up.

Both dishes look good. They’re taken out to the judges. 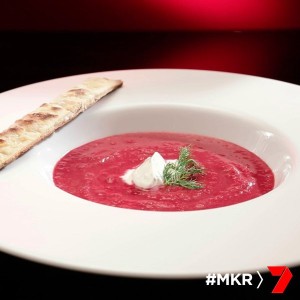 JP & Nelly’s Borsch is first to be tasted. Guy Grossi likes the beetroot but thinks it needed to be cooked more, it was a bit grainy and should either be chunky or smooth. It didn’t “Knock” Colin down, it wasn’t memorable. Liz Egan also says its not cooked well enough, as does Manu.

Next is Alex and Gareth’s sashimi. Guy says it’s a good bit of fish, but a few micro herbs and fish is not enough. Karen martini liked that they made a rice cracker, but it wasn’t great. Colin said it was too simple. There needed to be a sauce.

It’s onto main course. They have 1 hour.

Alex checks on his dessert. He tries to get his chocolate domes out of their casing, but they crack. It’s not looking good. He finally gets one out, then the rest of them come easy. Meanwhile JP and Nelly have a lot to do, the duck is in the oven, but none of the other components are done. JP is filling the tart with its marscapone filling.

Alex is preparing the rib eye. He coats it in spice crust and sears it all around before putting it in the oven. He’s making a flavoured butter to go with the steak.

Nelly is making a mash, but it’s “looking a bit stodgy” according to Manu. Meanwhile, one of Alex and Gareth’s oven was on grill, he’s not confident with the beef. Both teams are making a red wine jus, they both put their red wine in at very similar times, who’s will be the best? Who will be eliminated from My Kitchen Rules tonight?

It’s coming down to plating time. Alex and Gareth start carving the rib eye, it looks good, they are relieved. 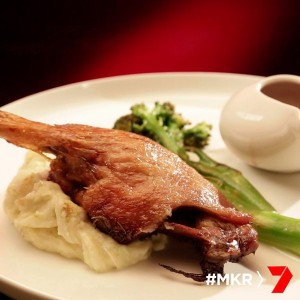 It’s a hectic race to plate up, they get there. Alex says he has some faults with the plating up. The first dish to be tasted is JP and Nelly’s duck. Colin said the duck was dry, the broccoli was “nearly soup”. Pete said the mash was “gluey”. Colin was a “bit disheartened”. The other contestants said the red wine jus was like vinegar. Next was Alex and Gareth’s steak. Karen said the flavours on the plate work, but they have fallen down on technique. Guy says its a good bit of beef but there have been some inconsistencies. Liz says the puree is not a puree, its stodgy. Manu says the jus is just read wine. Colin said we have two teams neck-a-neck but not in a good way, he was very disappointed.

It is on to dessert, the contestants have 30 minutes to finish.

Alex and Gareth cornel their sorbet and put it in the freezer then get onto the hazel nuts and sugar. JP and Nelly take their tarts out and cut it. JP is nervous about cutting it. He hesitates a lot, he finally picks up the courage to cut it, very, very slowly. They come out good. Meanwhile, Gareth starts assembling the mousse domes by piping in the mousse.

With 15 minutes to go, Nelly takes the figs out of the oven, they’re mushy and falling apart, they can’t serve them. She tries to save them by adding some sugar on top and grilling them with a blow torch to go brown. Alex and Gareth start plating up their chocolate domes. JP and Nelly plate up their tarts and garnish them with lemon zest and the roasted figs. Both teams get their desserts on the plates and both dishes look great.

The judges are back to taste the final course of the evening. The judges taste Alex and Gareth’s chocolate mousse dome first. The judges comment that the domes have been tempered perfectly. Guy says wow, the mousse is smooth and delicate, rich and dark. Liz says the sorbet is a perfect compliment to the dish. Pete says the dish is very hard to fault. Colin says it’s a good dessert. Manu just smiles and continues to eat the dessert.

It’s time for the judges to reveal their scores.

JP and Nelly have been eliminated from MKR tonight.