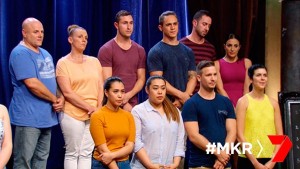 Who was eliminated from MKR tonight? It is the first elimination in this round and Curtis Stone will be the guest judge. The losers from last night’s challenge, the black team, will all cook off with Curtis, Pete and Manu as judges and the other teams as guests. The two worst dishes will go into sudden death, where the other teams will score their dishes.

Here is what they cooked in the first round:

Alex and Gareth decide to cook their omelettes individually rather than cut out circle shapes from one whole one. When they go to flip them, they are a bit burnt on the bottom and uncooked on top, so they go everywhere. It’s not a good start for them.

They start it again.

Meanwhile, Carmine and Lauren are making their polenta, they’re quickly running out of time. They get it done and move onto their ragu, they have big pots of mushrooms mixed with other veggies (onions, etc), they’re going to have to cook them down for a while.

Nev and Kell are rushing with their dish, Nev decides he wants to make a mayonnaise, but there is not much time. JP and Nelly are making their tostada. Nelly has issues with the deep fryer hurting her eyes, JP comes to the rescue and they switch jobs. Kell get her mushrooms out of the oven, but she isn’t happy with them, she’s having trouble dealing with the pressure and hits a wall, she goes off the set to the sick bay. Nev is working so hard he only notices after a minute. He is going to keep going and see if he can make it.

Carmine takes his polenta out and puts them in the deep frier, but they’re not turning out as they had hoped. They are sticking to the bottom of the deep fryer. They’re too thin, moist and not cold enough. Meanwhile, Tasia and Gracia are deep frying their pork cakes.

There is only a few minutes to go, Nev is plating up by himself. The other teams are all plating up too, they’re rushing and just throwing things on the plates. Time’s up.

The teams each take their plates out to the judges and the other contestants. They try Carmine and Lauren’s dish first. Manu says its not the best looking dish, but the polenta is seasoned “to perfection”. Curtis comments that the polenta was too thin and that is why it fell apart, but it was full of flavour. Next up is Nev and Kel’s steak and mushrooms, the beef was nicely cooked but Manu wasn’t sure about the combination of flavours and Curtis though it was under seasoned.

Alex and Gareth’s omelette is next, it was “too eggy” according to Curtis, the plating is inconsistent and Manu also thought it was doughy and eggy. The crab was tasty though. JP and Nelly’s tostada was next. All the judges liked it. Manu said the text was good and the beef was cooked well. Pete liked the pickled Jalepeno on top. Tasia and Gracia’s dish was “unique”. Pete liked that it was all full of flavour and it was a great dish, Manu thought the sweet chilli sauce was too sweet. Curtis Stone announces his favourite dish was cooked by Tarsia and Gracia.

The team chosen by the judges to go into the elimination is Nev and Kell.

The team chosen by the other contestants that is going into elimination is Carmine and Lauren.

JP and Nelly, Tarsia and Gracia and Alex and Gareth are all safe.

Carmine and Lauren are cooking against Nev and Kell in a sudden death elimination.

Carmine and Lauren are going to cook fettucine and a beef ragu.

Nev and Kell are going to cook cripsy skin barramundi with puttanesca sauce.

Kell is worried about Nev’s preparation of the fish, he is hacking into it and cutting the pieces into all different sizes. Kell prepares the eggplant. The other teams cheer Nev and Kell on.

Over at Carmine and Lauren’s bench Carmine is preparing the pasta dough and Lauren is making the ragu. They are concentrating very hard and there is no cheering coming there way. Lauren and Carmine roll out the fettucine and they are happy with how it looks. They are hoping they can get it all done in time.

Kell is cooking the puttanesca sauce and Nev is making an aioli. Kell asks Nev to start cooking the fish. Kell puts the eggplant in the oven and Nev is still making the aioli. Back over at Lauren and Carmine’s bench Lauren is stressing as the water in the pots for the pasta is just not boiling and they may not get their pasta cooked in time. Lauren decides to split the water up into smaller pots so that it will boil faster.

Back at Nev and Kell’s bench, Nev finally gets the fish into the frypan. Kell takes the eggplant out of the oven and Nev decides to cook a scallop to add something else to the plate. There is only 10 minutes left on the clock and Lauren and Carmine are still waiting for the pasta to boil. Carmine tells Lauren to just put the pasta in the pot, even if the pot has not boiled. Both teams are getting ready to plate up their dishes. There’s three minutes remaining and Lauren and Carmine’s pasta is finally cooked. They rush to get their dish on the plate. Time is up and both teams finish just in time.

Now it’s time for the judges to taste the dishes. First up is Nev and Kell’s dish. The judges give nothing away as they eat the fish. The next dish they taste belongs to Carmine and Lauren.

It’s time for the judges to reveal their decision. They critique Lauren and Carmine’s dish first. Pete says the pasta was cooked well and he could have had a little bit more sauce. He said it looked a bit messy on the plate. Manu said the pasta was good but the beef could have been smaller. It was good but it wasn’t perfect. Next they critique Nev and Kell’s dish. Pete asked if they tried the dish. The fish was cooked perfectly but the eggplant was undercooked. It was good but it was not their best. Manu said their decision was very close.

The team that created the best dish tonight is Carmine and Lauren. Nev and Kell have been eliminated from MKR tonight.