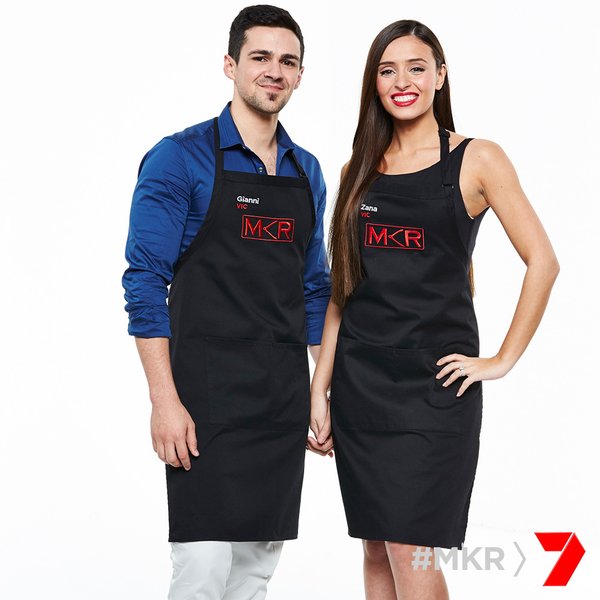 On the w ay back from Coles, their car’s horn got stuck on. They pulled over and turned the car off, it was still going. They managed to reset it and were off again.

Zana started on the dough for the pita, she had issues with kneading it, she wanted it perfect so threw it out and started again. The next batch was also too hard, she put it in a machine and it wasn’t good. With two batches in the bin she tried again, this time it worked. She rolled them out from small balls to make 15 layers in the bottom layer and 15 layers in the top. She added the filling, assembled it and put it in the oven.

They were worried about the Pita in the oven and decided to take it out. They let it rest while they answer the door to the guests then cut it up, its cooked. They plate up and bring it out to the guests. 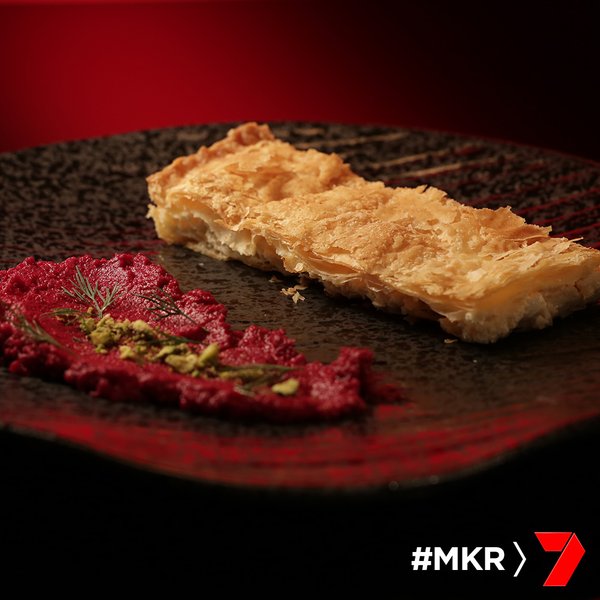 The first to review the dish was Manu. He said he was “devastated”… that he didn’t have any more to eat. He said he has never been so excited to dig in. The filling and the pastry was a match made in heaven. Manu loved it, it was “perfect”. Pete said this is what the competition is about, simple food cooked really well. They delivered on this.

The guests were divided on the next course, not many people like livers. They couple were cooking their main course when they opened the oven and something was badly burnt, smoke filled the room. The breadcrumbs were ok, the smoke was from juices of the beetroot from the last dish. They used the breadcrumbs to coat the livers and pan fried them. The plated them up and took them to their guests. 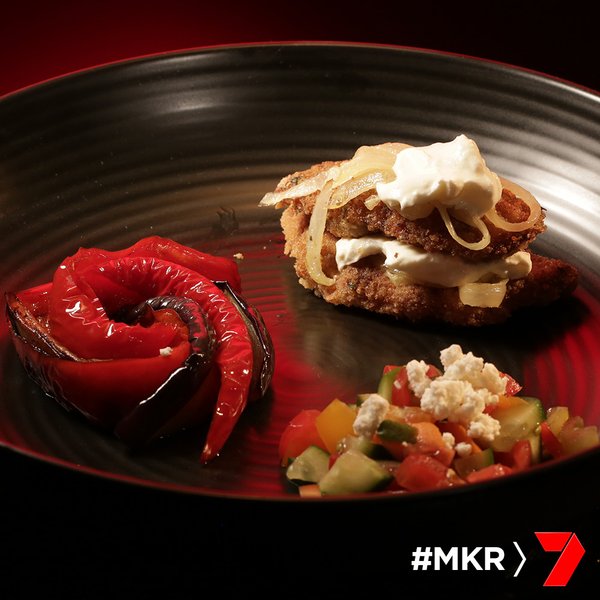 The first to try this dish was Manu. He said he enjoyed the crumbs, it needed a little more salt, but it was only a minor criticism. If you were going to get someone to try livers for the first time, this is probably the best way to do it. Pete said it was “next level”, the liver was cooked perfectly, the peppers and the eggplant were “so yum” and he will “remember this dish for a long time”. The guests agreed, they loved it.

Gianni and Zana begin preparing the dessert. Gianni has cut the doughnut dough and it has risen. It’s ready to be deep fried. While frying the first batch the temperature drops in the deep fryer and they are unsure if the doughnuts are cooked. The doughnuts are cooked, just, so they decide to cook the next batch for a little longer. Gianni pipes the ganache into the doughnuts and rolls them in sugar. Zana makes the espresso coffees in her machine once she works out how to use it. 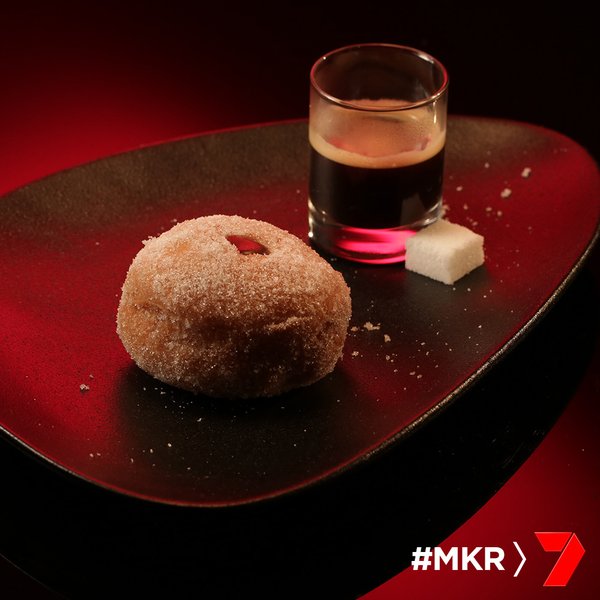 Dessert is served. The guests are initially a little disappointed that there is only one doughnut. Pete and Manu try the dish. Pete says the Krofne were excellent and beautifully cooked. He did question if it was enough for a dessert. He wanted something more. Maybe the coffee could have been turned into an affogato. Manu loved the dessert but he thought the quality of chocolate was very poor. He said it was a good way to finish the meal. The guests really enjoyed the doughnuts. The Police officers really enjoyed the dish. Cheryl thought it tasted like a doughnut you would buy from a store.

It’s time for the contestants to score. The scores will not be revealed at the instant restaurant, it’s time to head to MKR headquarters. The team with the lowest score will be eliminated.

The scores for Gianni and Zana are ready to be revealed.

Combined score from the guest teams 42/50

Gianni and Zana are in first position. Cheryl and Matt have the lowest score and were eliminated from my kitchen rules 2016

Tomorrow the new teams will be cooking.