It is MKR Elimination night, sudden death between Eve & Jason and Mike & Tarq, who will be eliminated from My Kitchen Rules tonight? 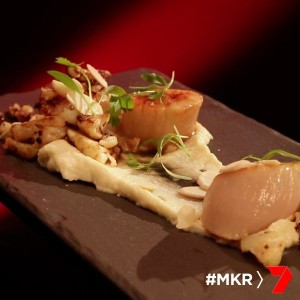 Both teams are new to the sudden death cook off. Each team have to cook a three course meal and the best team as judged by the judges will stay in the competition.

Mike and Tarq are making thai prawn bisque with prawn toast for entree, sesame crusted tuna with home made soba noodles for main and indian rice pudding with stone fruit compote for dessert.

Eve and Jason are making seared scallops with cauliflower and miso for entree, Sri Lankan beef cury with toor dahl for main and spiced pear with butterscotch sauce sorbet for dessert.

The teams get cooking. It’s not long before Tarq cuts his finger, almost immediately after, Mike cuts his finger. Meanwhile, Eve and Jason are taking their time, they are probably the slowest team in the history of My Kitchen Rules.

Mike has made his prawn toast and has cut it up into fingers ready to go into the deep fryer. Eve and Jason are preparing their cauliflower to go with their scallops. Eve is preparing the miso sauce and Jason is still meticulously cutting the cauliflower, he seems oblivious to the time constraints. Eve feels that they are running out of time but is not working any faster. 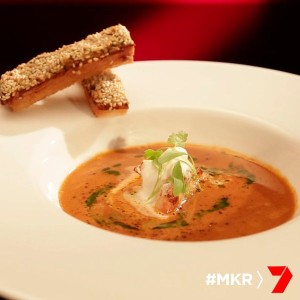 Mike starts deep frying the prawn toasts. Jason is still cooking the cauliflower florets in a frypan. There’s only 20 minutes remaining. Eve begins preparing the scallops and starts frying them in a hot pan. Some of the scallops look a little raw. Finally Jason starts plating up. Mike and Tarq start plating up too. There’s a minute remaining and Eve is cooking the last few scallops. Both teams get everything onto the plate.

It’s time for the judges to taste the entrees. The judges taste Eve and Jason’s dish first. Guy says cauliflower and scallops are a perfect match. He likes how the scallops are seared. Karen says the dish needs a little more pizzaz. Pete says it needed a little more of the miso sauce and then it would have been a 10/10. Now they taste Mike and Tarq’s dish. Liz says the prawn toast is gorgeous and the bisque has a lovely depth of flavour. Colin says he disagrees and he would have liked to have seen some more flavours in there. Manu says if he was given this dish in a restaurant he would have been very happy full stop.

The contestants are back in the kitchen to prepare their main meals. Mike is preparing the soba noodles and Tarq is preparing the sesame crusted tuna. Jason is preparing the ginger cake for dessert. He then places the pears into a poaching liquid. Tarq is cooking the soba noodles. Eve is flavouring the dahl and she is happy with the flavour but not happy with the texture. Tarq is flavouring the rice for the pudding and is making a fruit compote. Mike starts frying the tuna steak in a frypan but the frypan is too small so he takes it out again and decides to chop it up. It’s plating up time. With 60 seconds to go they are frantically plating up. Both teams complete just in time.

It’s time for the judges to taste the main course. The judges taste Mike and Tarq’s dish first. Liz says she really enjoyed the dish and the tuna was a generous serving. Colin disagrees again and says the proportion was not right and he didn’t understand why they put the tofu there. Now they taste Eve and Jason’s dish. Colin says it has a lot of heat in there and the dahl is overcooked. Guy agrees that the dahl is overcooked. Karen disagrees with both of them and says she likes the texture. Manu agrees with Karen and Guy asks if he thinks it’s not too mushy, Manu replies that dahl’s can be cooked forever.

It’s time for the contestants to prepare their last dish, dessert. Tarq gets straight back onto the compote and Mike heats up some pistachios in a frypan. Eve and Jason are making a butterscotch sauce and Eve takes the yoghurt sorbet out of the freezer and starts quenelling them. Mike and Tarq are also quenelling their rice pudding and putting them onto a plate. Tarq places only 4 quenelles on the plates before accidentally knocking the entire tray of remaining rice puddings onto the floor.

Mike just gets back into the kitchen and quenelles some more from the mix they had remaining. Both teams start plating up their dishes. With seconds to spare both teams get their food on the plates.

It’s time for the judges to taste the final course, dessert. The judges taste Eve and Jason’s dish first. Guy says its a great combination of ingredients and it’s not overly sweet. Colin says he thinks they’ve tried to soak the syrup through the cake but it’s a little dry. Manu agrees that the cake is dry but overall it’s too sweet for him. Next they try Mike and Tarq’s dish.

It’s time for the judges to score tonight’s meals.

Mike and Tarq have been eliminated from MKR tonight.