It is JP and Nelly’s instant restaurant on My Kitchen Rules 2016 tonight. The “love birds” from Queensland’s restaurant is called The Sandy Teapot. Nelly has a love for tea, and this theme will run through the night. For entree, JP and Nelly are making potato and cheese pierogi with bacon and sage sauce. Main is rib eye with celariac mash and lapsang souchong barbeque sauce. Desert is chai infused creme brulee. 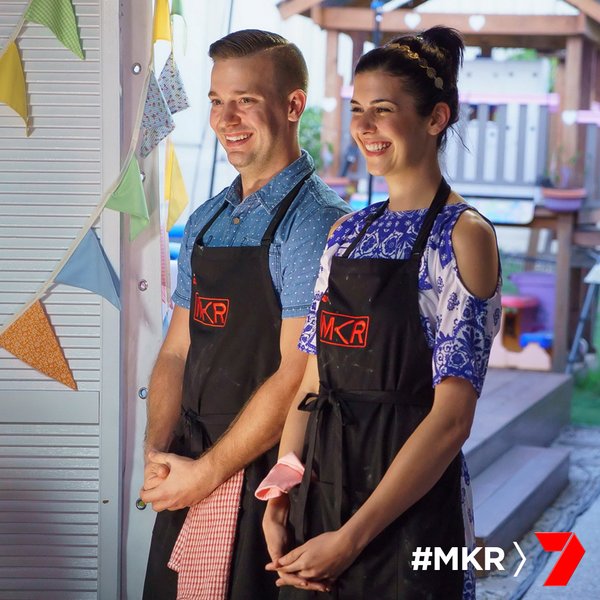 The first thing they get started on is the dessert. They smash out the creme brûlée, which needs to set for 3 hours. The next thing on their list is to get the pierogi done. They mash the onions and sour cheese to make a filling and get ready to meet the guests. The guests love the instant restaurant’s decorations with the exception of Jessica and Marcus who are coffee people. 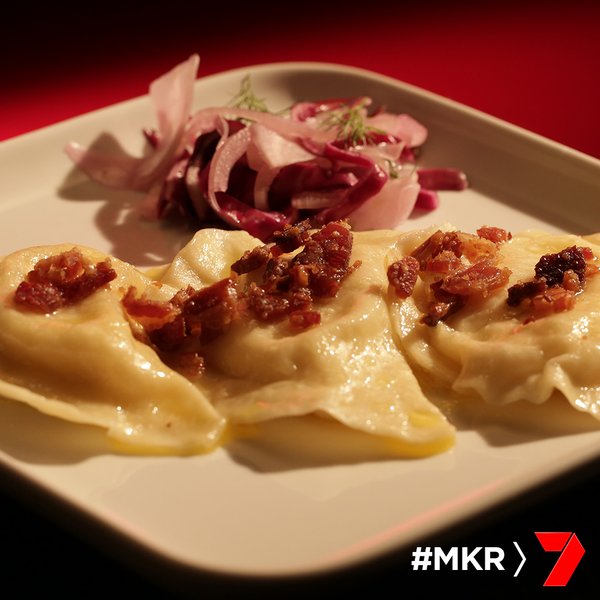 JP and Kelly get started on the pierogi pastry. The judges arrive and are seated in the restaurant. Jessica says that due to her Polish heritage she is excited to taste the pierogi. She tells the other guests that she loves carbs, but they are quite confused as they thought she hated carbs. JP and Nelly boil up their pierogi and start plating up the dish. The take the entree out to the guests. Pete and Manu tasted the dish. Manu asked whose recipe it was. Nelly replied that it was her mum’s recipe. Manu said the negatives were that there wasn’t enough. Smooth and silky cheese and potato, yum! Pete asked if that’s how it’s traditionally served. She said it was except for the sage and the little sauerkraut salad which they added. He said he loved it. The other guests loved it as well, even Jessica who ate the whole lot. 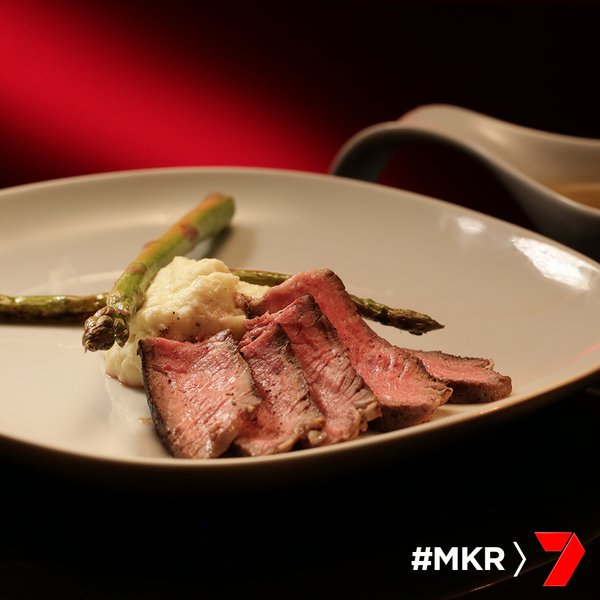 JP and Nelly started on the rib eye steaks for the main. They’ve seared them and placed them into the oven. Then they get started on the tea flavoured sauce. Nelly prepares the celeriac mash. She’s not happy though as the celeriac was undercooked and now the mash is lumpy. JP says they can’t re-do the mash as the meat cannot wait for more potatoes to boil. The wheels seem to have fallen off as they begin arguing and getting cranky with each other. JP says that its a mash not a puree. JP slices up the steak, he hopes that it’s cooked medium. The steak is rare, he’s not happy with it. He doesn’t want to risk putting the steak back into the oven so he decides to serve it as it is. They plate up the dish even though they are disappointed with the main elements on the plate. They take the dish out to their guests. Pete and Manu taste dish. JP and Nelly told the judges they are not happy with their dish. Pete says he was hoping the rib eye steak was going to be served on the bone but that was the only disappointment. He says it was really beautiful home cooking with a little flair. Manu says its a beautiful sauce with a beautiful piece of beef and a lovely puree. JP and Nelly are so relieved that the judges love the dish. The other contestants taste the dish and they enjoy it. 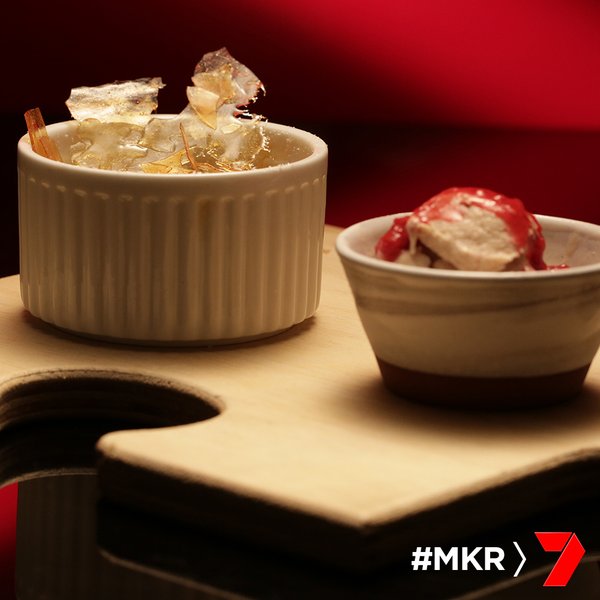 JP and Nelly take the creme brulee out of the fridge and sprinkle them with sugar. They torch the sugar on one or two brulees and the gas runs out on their blow torch. JP runs out the door to try and find a gas refill. He heads to the service station in the hope that they sell the gas. The guests are at the table waiting for their dessert. Nelly is scooping out her ice-cream but it’s frozen quite hard and is icy. She’s not happy with it. JP still can’t find any gas and has been gone for 30 minutes. Manu goes into the kitchen and asks what the problem is. Nelly tells him and he tells her to try and think of a solution. She comes up with the idea of making a toffee and putting it on the top. She sets the toffee and breaks it apart and puts it on top of the brulees. They plate the dish up and take it out to the guests. The guests notice the strange cracked toffee on the brulee. Pete and Manu taste the dish. The toffee still crunches. Manu congratulates Nelly on creating the toffee to go on top. He was happily surprised with the creme brulee flavour, he says it could be cooked a little longer. He doesn’t like the ice-cream and says the flavour is wrong. Pete’s brulee is a little undercooked but not unpleasant. The contestants get to taste the dish. They enjoy the toffee but the brulee is runny. Jessica and Marcus really liked brulee and the ice-cream. The contestants are wondering why Jessica has liked everything at tonight’s instant restaurant. They are wondering if it is strategy. She seems like a whole different person.

It’s time for the contestants to score the meals tonight.

That places JP and Nelly second on the leader board. Tomorrow Nev and Kel and cooking in Perth.