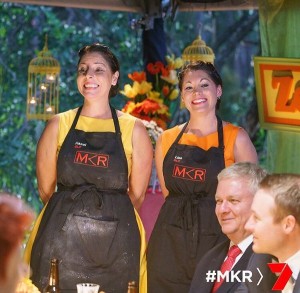 It is Hazel and Lisa’s redemption round and they must beat the lowest score on the MKR leaderboard to stay in the competition. The step-mother and step-daughter team from Queensland are hoping to improve on the low score they received last round.

The girls head straight to the shops to pick up the ingredients for their meals tonight. For entree they are making pan seared duck breast with baby beets and rhubarb chutney.

After setting up their instant restaurant “Zesty” they get straight into the kitchen and begin preparing dessert. Hazel is starting the sorbet. Lisa crushing the biscuit crumbs for the pie base.

She then gets started on the cream centre for the pie. Lisa starts the rhubarb chutney and then pours them both a glass of wine. Hazel begins the thrice cooked chips. Lisa is making the mayonnaise and hopes she will not have the same problems as last time. It works first time this time round. 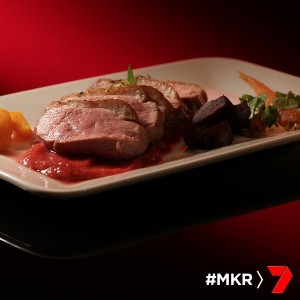 The guests begin to arrive and the girls change and prepare to greet them. The guests are seated at the instant restaurant. As Lauren and Carmine are the only contestants they tell the other guests how the food wasn’t that good last time and it wasn’t worth the long wait.

The girls check on the sorbet and it’s not quite the right consistency but they take it out of the churner and pop it into the freezer. Hazel gets started on the thrice cooked chips. She has already cooked them once so it’s time to cook them twice more.

The judges arrive. It is their first time at Hazel and Lisa’a restaurant. The judges are seated and their menu is revealed.

Hazel and Lisa get back into the kitchen and back on to the chips. Lisa starts cooking the duck breasts. 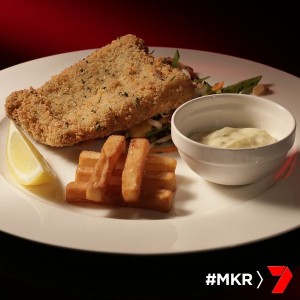 She was implying that there has been some strategic scoring going on. Meanwhile back in the kitchen Hazel and Lisa slice up the cooked duck breast and plate up the entree.

They take the entree out to the guests. The judges taste the dish. Manu asks if they think this dish is a redemption dish. They reply that they do. He asks them again and says that he does too. The duck is melt in your melt and is cooked perfectly. He says it goes well with the rhubarb chutney. It’s sublime. He does say that it needs a little bit more seasoning.

Pete says it is a beautiful dish to start with and that it’s a generous serve of duck. He said his duck was not as well cooked as Manu’s, it needed to be cooked for another 30 seconds or so. The other contestants taste the dish. They mostly enjoy it with the exception of Lauren who said her duck was undercooked. Monique said the chutney was too overpowering for her.

The girls get back into the kitchen to start the main. Lisa is deboning the fish. Hazel prepares the crumb for the fish with herbs and panko crumbs. They crumb the fish and place them into the deep fryer and put the timer on. Suddenly Lisa realises the timer was not on and she doesn’t know how long the fish has been in for. They have no tester piece of fish and no spares. Hazel cooks the chips for the third time. They dress the salad and plate up the dish. 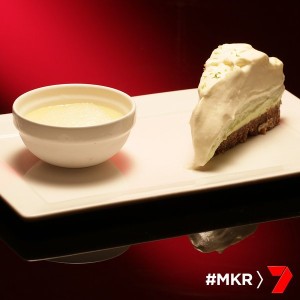 They take the dish out to the judges. Pete and Manu taste the dish. Pete asks if they like the dish and they reply that they do. Pete said the fish was cooked perfectly and the salad was delicious. However he said the chips were soggy and terrible. Manu said it was a pleasant dish but did not wow him as much as the entree. He found the slaw and the chips soggy. The mayonnaise was yummy though. The other guests taste the dish. They are all upset that the chips are soggy and some people comment that the fish is overcooked.

The girls get back into the kitchen and check the sorbet, it is not quite set yet. They put it back into the freezer and wait a little longer. They take it out a second time and it melts almost instantly. They are unsure if they are going to send it out or not. They spoon it into the individual ramekins and put them back into the freezer. It’s time to cut up the lime pie. It should have three distinct layers and it does. They are very happy with how the pie has turned out. Hazel cuts the pie up and they begin plating it up.

It’s time to take the dessert out to the judges. Pete and Manu taste the dish. Pete says the pie is good but it doesn’t feel like a great dessert. He really disliked the sorbet and said it was too sweet. Manu says the sorbet just did not work. Pete says the bottom layer of the pie is too thick and too dense and he is not a fan of it. Manu liked the pie even though the biscuit base is too thick. The other contestants taste the dish. They all seem to be having trouble cutting through the base of the pie. Lauren says it is not a competition dish. Carmine says he was let down by the dish.

This places Hazel and Lisa third on the MKR leaderboard by one point.