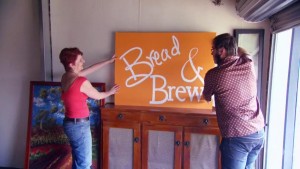 Eve and Jason are the first of the new contestants in the MKR 2016 Colin Fassnidge round. The soulmates from country Victoria grow most of their own food and bake their own bread. The couple’s instant restaurant, Bread and Brew is set up in their shed. For entree, the couple are making herb crusted rainbow trout in fish broth. Main course is mediterranean rolled leg of lamb with roast vegetables and for dessert, Eve and Jason are making stout and chocolate pudding.

The first task of the night is to de-bone the lamb, Eve gets right on it. Jason starts on the stuffing. They get the lamb into a pressure cooker and start on the fish broth for entree. This means Eve has to debone the trout.

The guests arrive and Eve and Jason show them to their instant restaurant, which is in the garage. There are lots of introductions for the new teams. 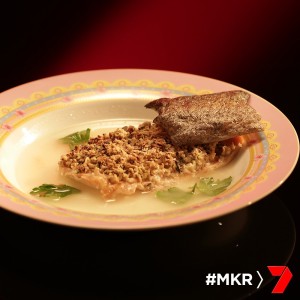 Colin Fassnidge arrives and he has brought a special guest, Rachel Khoo. We were right about the new My Kitchen Rules judge. She will be judging alongside Colin.

Eve and Jason bring out their first dish. It looks good. The first to taste the dish was Rachel Khoo. She loved the textures in the dish, they worked well, however the crust was slightly overcooked. Colin said he liked how they used the whole fish, even the skin, they should be proud of that. The crumb (oats) soaked up the moisture from the trout, he didn’t like them and the rosemary used in the dish wasn’t a good combination.

They go back into the kitchen to get working on their main. They take the lamb out of the oven, it is way over cooked. They cut into it and it is dry. They take out the second tray, its over cooked too.

It was a disaster, Eve didn’t know what to do, it couldn’t be fixed and she didn’t want to serve it.  Jason tastes the lamb stock and it tastes fantastic. Eve is so upset that the lamb is overcooked, she is trying to salvage some pieces that are not too bad. Jason is concerned about how the oven is cooking, the carrots and parsnips are not cooked. 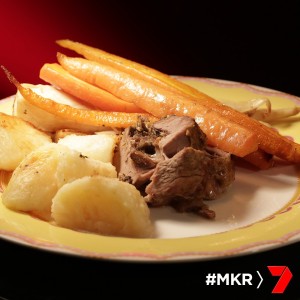 Jason and Eve get back into the kitchen to begin the stout and chocolate pudding. The pop them into the oven and put the timer on as they are concerned about overcooking them. They take one pudding out of the oven and it is undercooked so they leave the puddings in a few minutes longer. They dust the pudding with some icing sugar and take it out to the judges. Rachel and Colin dig in to their puddings and you can see that they are quite soft in the centre. Colin says it was rich and oozy and he loved the crust on the top. He could only taste a little of the stout. Rachel said it looked beautiful however she thinks her pudding was a little underdone although the taste was great. The other guests taste the dish. Dee says it was too chocolatey and underdone. The other guests seem to like the dish. 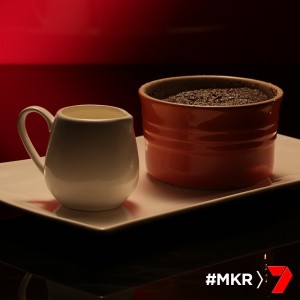 It’s time for the teams to score.

Grand total score 59/110 and places them at the top of the leaderboard.