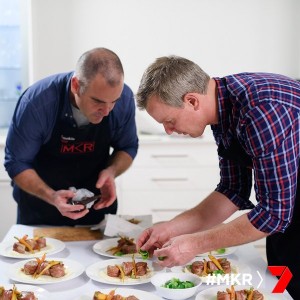 Chris and Cookie cook in their MKR Instant Restaurant. Tempers flare as Hazel and Lisa call out Carmine and Lauren for strategic voting. The close mates from NSW are both dads are set to cook up a storm. For entree, they are making “Double the fun”, a twice baked cheese souffle recipe. Main is “Sweet Swine” a prosciutto wrapped pork fillet with potato puree and a honey sage jus. Finally, for dessert Chris and Cookie are making “Crunch Time”, a chocolate mousse with hazelnut praline and raspberry coulis. Their restaurant “Sand and Steel” is harping back to the industrial age of NSW and it’s coal mines.

The team get back from their shopping and with three hours, start preparing their meals. Cookie starts on the buttermilk ice cream for their dessert, but he took it too far and had to make it again. The second time is a winner and put it in the ice cream machine. Chris is making the souffle and adds a surprise, cauliflower, blended with the mix. 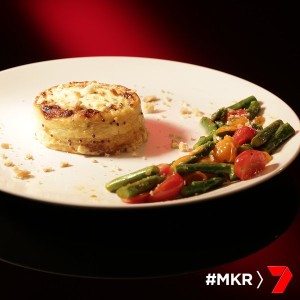 Next up, the pork. Cookie wraps the pieces the prosciutto, he really wants to get this right, under cooked is no good and over cooked makes the pork tough.

The guys get dressed and Chris puts the souffle into the oven just before the guests arrive.

They let the in and come back to check on their souffles, they are good. Their ice cream is good too.

The judges come in and they introduce their menu, then its back to the kitchen to plate up their entree. They are on time and on track, everything looks good. The first judge to comment was Rachel, she asked which cheese they had used, it was cheddar.

Rachel said she was a cheese expert and was expecting something very cheesy. She was happy that she got this, they chose the right cheese. However, the veg on the size could have had more flavour.

Colin said they should have put more cheese on the top to get the crispy flavour, he wanted more cheese, but it was light and airy and was glad the veggies were there to break up the strong taste of the souffle. 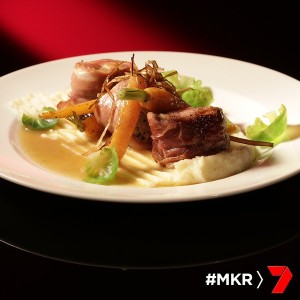 It’s back into the kitchen and on to the main. The boys get the jus reducing and is making a prune jam. They are also making some brussel sprouts. Then, all of a sudden, the power goes out. All the lights turn off, just as they are about to say something, it turns back on, they’re lucky. Colin tells the guests he is a pork ambassador for Australia so hopes the pork is done well.

They fry it in the pan and cut open a test one, its raw, they’re not sure how to cook it, whether it is medium or medium-well. They put it in the oven for a couple of minutes. They don’t have any issues plating up, the presentation was great.

Colin is the first to judge, he says he bases his business on cooking pork. He said if he cooked this many medallions, even he will overcook one or two, but these guys didn’t make any mistakes. He says it was very well done. It is like a dish he has had on his menu, it was a top notch dish.

Rachel said she couldn’t have done a better job, the plating was beautiful and every plate was consistent. They have a real attention to detail which shines through. The pork was perfect. The only thing was not enough butter in the potato puree, but it was a minor criticism. The other contestants really enjoyed their meal too. Lauren said she wasn’t huge on pork, the meat was cooked inconsistently. Lisa said the dish was very close to perfect. 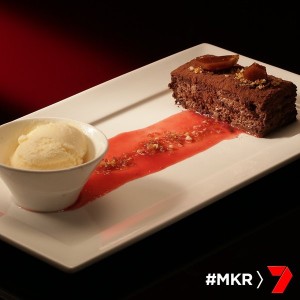 The boys get back into the kitchen to finalise the dessert. The chocolate mousse and the ice-cream is done they just need to make the praline and the coulis. They cut up the chocolate mousse into very even slices and they dust it with cocoa powder. They plate up the dish beautifully and take it out to the judges.

Colin and Rachel taste the dish. Rachel says she expected something rich, bubbly and light and the boys delivered it. She said they were a little heavy on the cocoa powder. Colin says he didn’t really get crunch time but he loved the mousse, the ice-cream and coulis. He said well done on the dessert, it wasn’t quite as good as their main but it was still up there. The other contestants taste the dessert. Mike accidentally breathes in the cocoa powder and he starts coughing. Some people said they were expecting more crunch in the dessert.

It’s time for the contestants to score tonight’s meals.

The total MKR score for Chris and Cookie tonight 87/110

This puts Chris and Cookie at the top of the MKR Leaderboard. Tomorrow is Tim and Dee’s Instant Restaurant.