Tonight is the first instant restaurant of group 2 on MKR for 2016. It is Alex and Gareth, miners from QLD, and their restaurant is called garden of mine. For entree, Alex and Gareth are making miang of crab, main is a roast duck lychee red curry and cauliflower rice and dessert is chocolate lava cakes with white chocolate sauce. 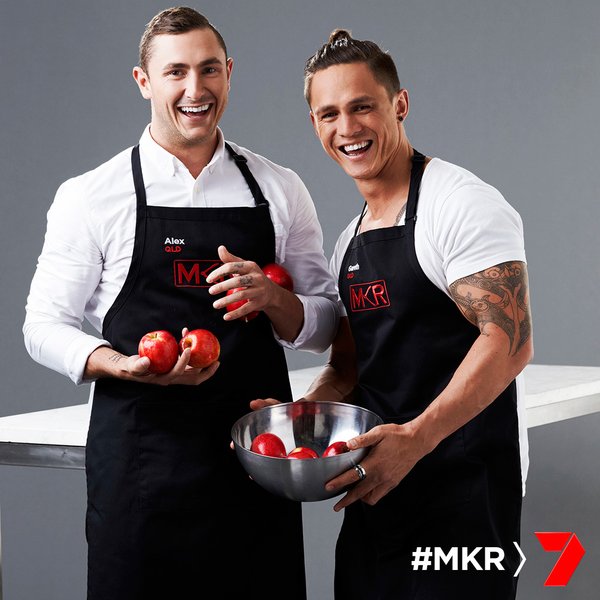 The start their entree, they’ll be serving their crab salad on a banana leaf. It had lemon grass, lime juice and chilli. Gareth started on the main, he needed to start on the curry paste, which he is making from scratch.

The prepare the crabs and cook them on the stove. The orange salad is made and it’s time for the judges to arrive. The judges are seated and the menus are revealed. The boys head back into the kitchen and remove the crab from the shells being very careful not to get any shell in with the crab meat.

It’s time to plate up the entree. They place a square of banana leaf on the plate and top it with the crab meat and salad. They take the dish out to the judges. Jessica comments that the oranges in the salad don’t look segmented and she can see the pith. The judges taste the dish. Pete says they didn’t deliver with their dish. The dressing is the star of the dish but he couldn’t taste it. Manu has left half of his chunky oranges on his plate. The judges ask for them to deliver a flavour bomb in the next course. The contestants get to taste the dish. Nev got a tiny bit of shell in his crab, then he got another piece of shell. He did like the flavour of the dish. Jessica said the dish lacked punch and she did not expect the citrus in the dish to be orange, she expected lime. 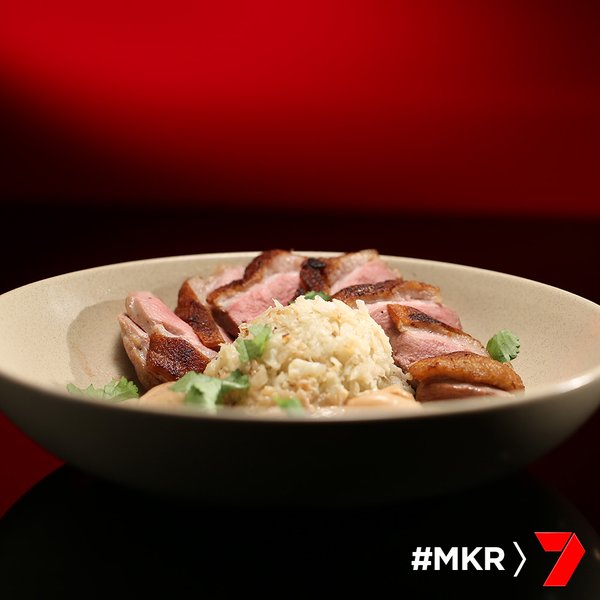 It’s time to keep working on the main. The cauliflower is being prepared for the cauliflower rice. The boys taste their curry but are concerned about the flavour. The duck breasts were cooked in the oven and taken out to rest. They decided the skin needed to be crispy so they put them back in the pan. They plate up the main and take it out to the judges. Pete and Manu taste the dish.

Manu said the pair looked stressed. He asked if they were happy with the course, they say they are. Manu nods and says “i think you’ve done very well”. He is happy with the beautiful duck, cooked perfectly. Pete also says he is impressed with the dish. The duck was nice and pink and the cauliflower rice was seasoned well. The red curry sauce wasn’t perfect but the dish tasted good. 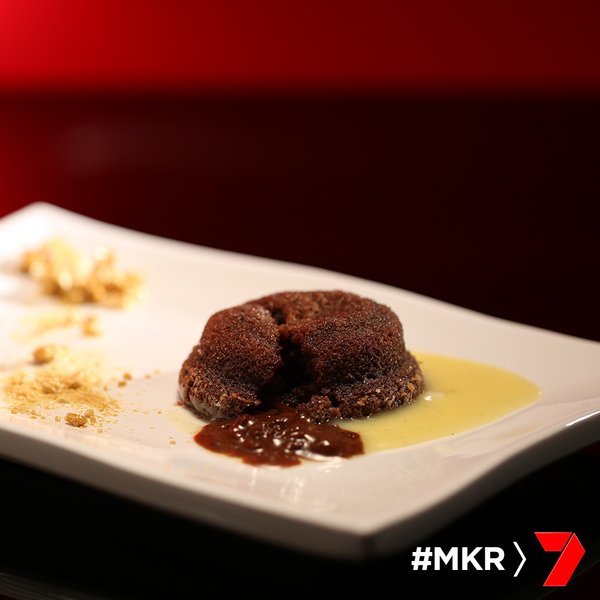 It’s dessert time. The boys melt the chocolate and mix it through the batter when Manu walks in. The boys joke that they really want to serve lava cakes not muffins. They take the lava cakes out of the oven and cut open a test one. It is definitely a lava cake so they are very excited. A few seemed undercooked so they put them back into the oven for a few more minutes. They quickly plate up the dish and take it out to the judges. Pete and Manu taste the dish and when they cut into the cake the chocolate oozes out. Manu says it is a dangerous dessert, his is a beautiful and moist cake but it’s not a lava cake. Pete says he was lucky as his oozed the chocolate out, he said the dish was let down but being too sweet. The contestants tasted the dish and agreed that the cake was moist but not oozy and was overly sweet. Jessica said she just doesn’t like chocolate.