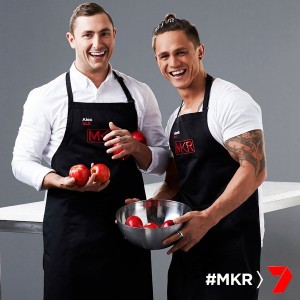 Alex and Gareth cook tonight in their MKR instant restaurant redemption round. They have to beat Monique and Sarah’s score of 62 to stay in the competition. What will the QLD miners score on My Kitchen Rules tonight? Their score in the first round as 60, so if they improve slightly, they should be safe

For entree, Alex and Gareth are making a spanish mackerel ceviche with chorizo recipe. Their main course recipe is fennel crusted pork belly five spice pineapple and cherry sauce. Finally, for dessert they are making a chocolate tart with raspberry and blueberry cream.

First off the bat, Gareth starts on the cherry sauce. He says its a bit of a risky flavour combination but he hopes the risk will pay off. They start scoring the skin on the pork so the skin gets crispy.

Gareth is going to prepare the fish and Alex is rolling out the short crust pastry.

The guests arrive and are seated at the instant restaurant Garden of Mine. There is tension in the air and some expectations of a few fireworks tonight. 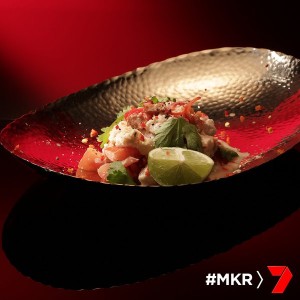 Gareth and Alex get back into the kitchen to make the fennel crust rub for the pork belly. They coat the pork in the rub and put it into the oven. The doorbell rings and the judges arrive. They are seated at the instant restaurant and the menu is revealed.

The boys get back into the kitchen and start dressing the ceviche. Gareth checks the taste of the ceviche and he’s happy with the flavour. He drains the lime juice, adds coconut cream, chilli, tomato and red onion. They mix it well and plate it up.

They take the dish out to the judges and are hoping that the fish is cooked right. Pete and Manu taste the dish. Pete says the dish was half way there for him. He says the fish is overcooked.

Manu says ceviche is normally done to order, he enjoyed the flavours but it was hard to judge as the fish was overcooked. The other guests taste the dish and love it. The police officers did not like the flavours of the dish. Lauren said this was the best entree she has tried this round.

The boys get back into the kitchen to check on the pork belly. They are worried about the crackling as it hasn’t crackled evenly. They don’t want to put it back into the oven and risk overcooking the meat. 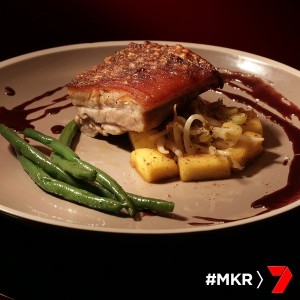 It’s time to plate up. They place the pineapple and green beans on the plate. They drizzle the cherry sauce on the plate and sprinkle on dome fennel seeds. The boys are not really happy with the dish as a whole.

They take the dish out to the judges. Pete and Manu taste the dish. Pete says that the boys look nervous, and they reply that they weren’t one hundred percent happy with the dish.

Pete says he’s getting really enjoyed as they stuff up the simple dishes but cook the difficult dishes to perfection. He said it’s bloody delicious! The pork belly is crackly and crunchy. It was a courageous dish, unique.

Manu said when he read the ingredients on the menu he thought it wouldn’t work, but when he tasted it he did. He asked where the sauce was? It was to die for but definitely wasn’t enough.

The other contestants taste the dish. Most of the contestants loved the dish, even Monique and Sarah. 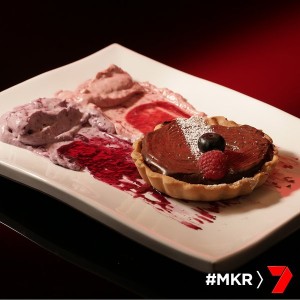 Back in the kitchen the boys get started on the chocolate tart. At the table Lauren and Monique are having an argument about strategic scoring. Lauren said that because they are the last team to cook the people at the bottom of the leader board might score strategically. Carmine tells Lauren that she sounds like she is scared already and they haven’t even cooked yet.

The boys fill their pastry cases for the chocolate tarts. Gareth makes both the raspberry and blueberry cream and they plate up the dish.

They take the tarts out to the judges. Pete and Manu taste the dish. Manu asks if they are happy with the presentation. He says the colours are pretty but the plating is average. He says the creams are nice but they don’t match the tart.

He likes the chocolate filling but its a bit hard and thick. Pete says he can see the effort they have put into the dish. He likes the pastry but is not keen on the filling. Pete also comments on the look of the dish, he says it looks like Pro-Hart has had a go at it.

The other guests are not really enjoying the dish. Lauren says she really liked the dish, Carmine says he thought the dish looked great.

Alex and Gareth are safe from elimination tonight, placing them in second place on the MKR leaderboard. Next to cook is Rosie and Paige tomorrow night.