Tonight was Matt and Rob‘s turn to host their MKR 2015 Instant Restaurant. Their restaurant was called Salt and Soil and had an Oyster theme.

For entree, Matt and Rob made Oysters Three Ways. The team controversially washed the oysters out to remove any traces of shell but may have removed some of the natural flavouring.

Manu started by saying his critique was very hard. He loves oysters, but said he believes they have “ruined a beautiful jewel of the sea” by washing them out. They should have washed them out with salty water. Pete said they were prepared with the ingredients over powering the taste of the oyster. Their technique also let them down, with the onions cut really rough and one of them was very buttery.

For main course, the team made Prosciutto Wrapped Quail with Kale, Orange and Walnut Salad. They were worried that the quail was undercooked. They didn’t have a spare to cut open, but luckily had a thermometer to test the temperature of the bird. It thankfully was at the right temperature and they plated up and served. The boys hadn’t cooked the dish before.

Pete said it was a confused dish, the quail stuffing was rough and the salad had no dressing. He said the risk hadn’t paid off for them tonight. Manu said the quail was dry and there were just too many ingredients.

For dessert, Matt and Rob made Homemade Brownie with Strawberries and Cream. The team had some issues with their brownie. They took it out of the oven and cut the first piece. It was basically still cake mix. While it cooled down, it solidified a bit. They didn’t have enough ingredients to start it again.

Manu said it was the best dish of the nice, it had a nice balance of sweetness. There were a few issues, he had the corner so it was a bit dry, the cream was over-whipped and it could have had some nuts. Pete said there were inconsistencies but the coulis was nice. 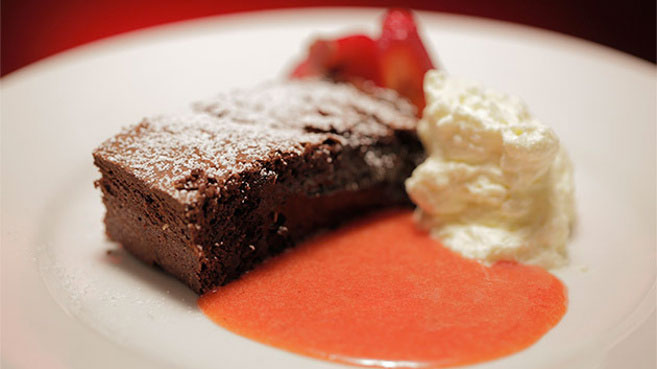 This places Matt and Rob at the bottom of the leaderboard.