Who wins MKR 2014? Tonight it’s Chloe and Kelly vs Bree and Jessica in the My Kitchen Rules Final. Who won tonight?

Spoiler: The winner of My Kitchen Rules 2014 is Bree and Jessica

Update 21:36PM: Pete and Manu are now going through Bree and Jessica’s dishes. Their entree was great, but needed more sauce. Their Scallop Lasagne was perfect, cooking so many scallops perfectly is hard to do. Their squab dish was perfect, the breast was cooked absolutely perfect. Crisp on the outside and perfect pink on the inside. The carrots were a bit crunchy though. Every element on the lamb dish had “tremedous flavour” with the best comsumes Guy Grossi has ever tasted in their life. Pete thought this was a perfect dish with nothing to fault. Their dessert was also a hit, the ice cream took Colin back to as if he was 6 again. Update 21:35PM: Pete and Manu are going through each of Chloe and Kelly’s dishes. Manu says their sauce in course 3 was the best sauce ever in the competition. They also mention that there are a lot of professional chefs who would not attempt their pig trotter dish. Their dessert was good, but the sugared glass was too thick and couldn’t be eaten easily. Update 21:30PM: Chloe and Kelly are happy with how they cooked, MKR will be the best thing that happened to them. Bree and Jessica explain that they’ve done it all for their families and a stab at a better life. Update 21:24PM: Bree and Jessica’s Rhubarb tart was “sensational”. All the flavours worked together really well on the plate. It was a “classic”. The ice cream had a good flavour, it was a very clever dish. Manu thought it was a “great” dessert. Update 21:22PM: The judges taste Chloe and Kelly’s figs first. Guy Grossi enjoyed the dark butterness of the ganache. The glass was very thick and hard to eat, it detracts from the dish. The ice cream was full flavoured and the figs were good. Update 21:20PM: Once again its mayhem towards the end. Kelly is shaking trying to plate up. They all make it just in time. Now its time for the teams to site back and hope they won the $250k Update 21:17PM: Chloe and Kelly are setting figs on fire and Bree and Jessica’s ice cream set perfectly. Update 21:15PM: 1 course to cook and there’s still 35 minutes to go in the show… Another ad break… Update 21:09PM: The contestants have 45 minutes to finish dessert. Its the last course for the night. Here are the dishes: Bree and Jessica – Deconstructed Chocolate & Rhubarb Tart 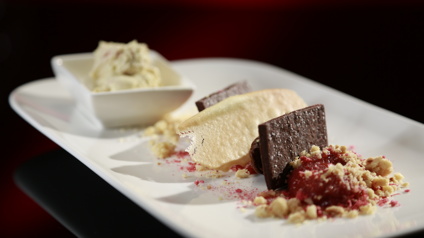 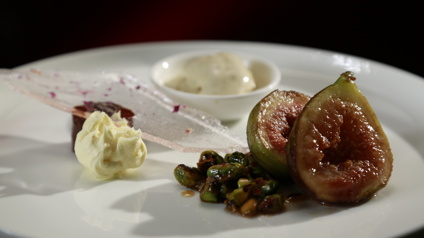 Update 21:08PM: Next was the lamb. All the judges loved the consommé. It was “fantastic”, “perfect”, “unbelievable”. They used a secondary cut of meat but took it to another level. This dish was “perfection”. Update 21:06PM: The judges start with the every-pig-part dish first. Its Colin’s style of cooking, it was a standout dish. Liz was surprised that home cooks could accomplish this. Manu loved the crispy ears. The sauce was slightly too salty and was similar to the last dish. Update 21:05PM: Once again it was a rush to beat the timer and have clean plates. Chloe and Kelly are splashing sauce around but they manage to make it Update 21:03PM: With 5 minutes remaining, Bree and Jessica have all their elements done and begin plating. Chloe and Kelly are starting to plate up but still have to fry their pigs ears. Update 21:00PM: Jessica gets back in the competition with the help of her family cheering her on. Update 20:56PM: Jessica having a bit of a melt down, their greens for the dish are turning brown in the pan. Update 8:52PM: Bree is taking care of this course while Jessica is making dessert. The ice cream is really runny after coming out of the ice cream machine. She mixes it and puts it in the freezer and moves on to the ganache. Update 8:51PM: Once again, Chloe and Kelly are removing bones from their dish. This time, its trotter bone! Update 8:49PM: Kelly says they are going to take the diners to the south of France with their trotter dish. They are mincing the trotter meat. Update 8:45PM: Here’s a pic of Bree and Jessica’s next dish, the ouzo lamb: 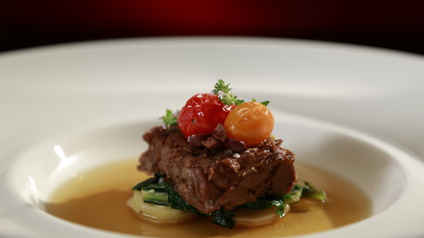 Update 8:42PM: Chloe and Kelly’s sweetbreads was a risky dish. Everything on the plate was perfectly cooked and the judges were blown away by it. Manu said it was the best sauce he has ever had on My Kitchen Rules. Update 8:40PM: The dishes make their way to the judges. The first dish they taste are Bree and Jessica’s spiced squab. The squab breast was perfectly cooked, it was like being in a very good professional restaurant. The sauce was sweet and spicy. The carrots could have had a few more minutes in the pan, but that was the only fault with the dish. Update 8:38PM: Bree and jessica have to re-arrange their lamb for the next dish, putting them a bit behind. Both teams are racing to get their dish on the plate before time runs out. Update 8:36PM: Chloe and Kelly are preparing their “pea foam” or was that “pee foam”… Update 8:34PM: Chloe and Kelly are getting their sweetbreads on, their sauce is still not reducing quick enough for their liking. Bree and Jessie are tossin’ their carrots and cookin’ their squab. Update 8:28PM: Here is a picture of Bree and Jessica’s next dish, the Squab: 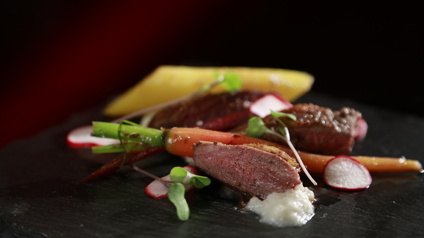 Update 8:26PM: Bree and Jessica are getting their lamb shanks ready for a future dish and starting the creme anglaise for dessert. Good to see they’re keeping up with the dishes! Kelly is reducing the sauce for their trotter dish. Update 8:22PM: Next, The skin was “sensational”. The fish was perfectly cooked but both Guy Grossi and Pete had bones in their fish. It’s “not what you want” when fish is confitted. Update 8:21PM: First up for judging is Bree and Jessica’s Scallop Lasagne. It was gorgeous and delicate. The pasta sheets were “silky”. It was a very fragile and perfect dish. Update 8:18PM: Another ad break. While Chloe and Kelly aren’t busy confit’ing something, here’s their Pigs trotter crépinette with crispy pig ears: 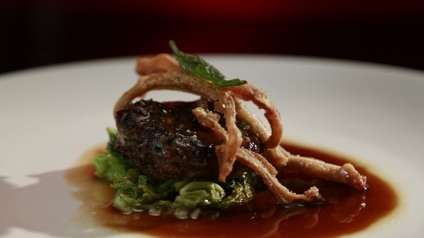 Update 8:12PM: Kelly is concerned with the deboning of the fillets, they get them in the confit and off they go. Bree and Jessie have their scallops out and starting to cook them Update 8:08PM: Chloe and Kelly are confit’ing more of their food for the next course. They get their pigs trotters and ears on for the course afterwards. Bree and Jessica get their shanks on for the fourth course with a whole bottle of ouzo, eek! Update 8:06PM: Chloe and kelly’s is next. The fried basil leave was good. They are impressed that the girls made their own cheese. The tomato was juicy. The best part was the cheese. How ironic. Update 8:05PM: Bree and Jessica dish is first to be judged. It was a “great fresh dish” and the whole dish just “dances on the palette”. Manu was looking for more horseradish. Update 8:01PM: While we’re waiting for this very long commercial break, here is a pic of Bree and Jessica’s Open Scallop Lasagne for the next course: 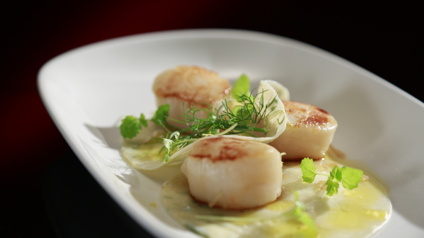 And Chloe and Kellys: 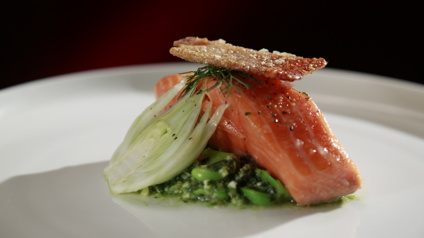 Update 8:00PM: First course is done. Both dishes look just like their pictures. Update 7:59PM: Chloe and Kelly are making cheese, i thought they hated cheese in the first instant restaurant round? Remember Mr and Mrs Cheese? Update 7:55PM: Chloe and Kelly’s family arrives, did not know Chloe had a 7 year old son. Apparently they made lots of friends this season, cool! Here’s what their entree looks like: 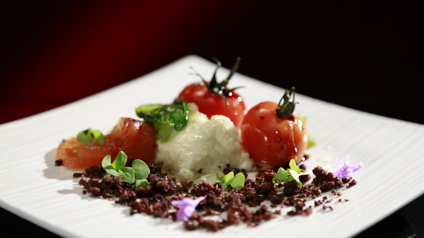 Update 7:51PM: Bree and Jessica are concerned with the amount of horseradish. Don’t make it too hot, Manu can’t handle it! Here’s what Bree and Jessica’s finished entree looks like 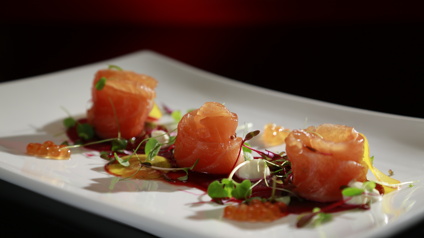 Update 7:42PM: For Bree and Jessica are cooking:

Update 7:40PM: Both teams will serve a 5 course menu, each producing 100 plates for the diners tonight. First course will be served in 2 hours. Update 7:38PM: Bree and Jessica are “just ordinary women” who want to do “extraordinary” things. They are hoping to make their daughters proud tonight. Update 7:35PM: Chloe and Kelly walk past their restaurant insignia “Nouveau”, Bree and Jessica walk past the sign for “Sage”, their restaurant for tonight