Who will be eliminated from MKR tonight? Its Bree and Jessica (SA) vs Thalia and Bianca (TAS) vs Cathy and Anna (NSW) in a sudden death elimination round. All three teams will cook off against each other and one team will be going home. We’ll keep you updated. 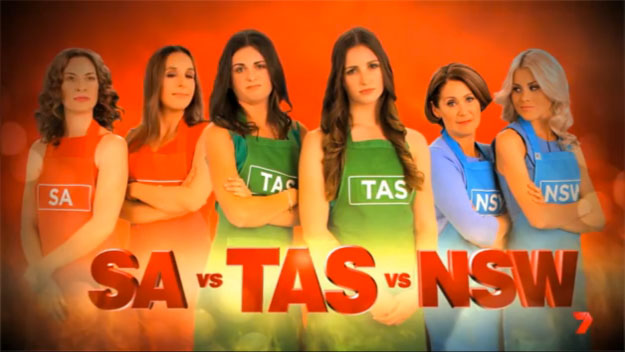 The first challenge was to trim and truss some beef. Cathy and Anna worked like a machine and finished early. Bree and Jessica also finished but Thalia and Bianca had not trussed meat before and theirs was a bit rough. Cathy and Anna won the challenge and had the advantage of choosing who will cook with which ingredients

They had the choice of beef, chocolate and skate wings. Cathy and Anna chose to cook with the beef. They gave Thalia and Bianca the skate and Bree and Jessica the chocolate.

For the second challenge, the teams had to cook one dish. Bree and Jessica cooked chocolate ravioli with chocolate sauce and orange. Thalia and Bianca cooked skate wings with pea puree and bubble and squeak. Cathy and Anna cooked beef fillet with a red wine sauce, mushrooms and cauliflower puree with wilted spinach.

First dish to be judged was Thalia and Bianca’s skate. Pete and Manu weren’t happy that the girls didn’t try the skate before serving it. Manu however thought the fish was amazing. They loved the bubble and squeak but questioned wether the onion rings were just a little too much.

Next was Cathy and Anna’s beef. They didn’t rest the beef enough and it bled into the puree. It affected the presentation but didn’t affect the taste. The beef was cooked to perfection. They also couldn’t fault the puree.

Finally Bree and Jessica’s chocolate ravioli was judged. The judges loved the dough and thought the chocolate sauce was amazing. They didn’t like the orange though.

The decision was tough but Thalia and Bianca made it straight through to the top five. The judges couldn’t fault their dish and that is why they were safe.

For the final challenge, Cathy and Anna and Bree and Jessica had to cook their signature dish to remain safe. The dish will be blind-tasted by the guest judges.

For this round Bree and Jessica cooked Butter chicken with red lentil dhal and rice. The judges thought this dish was “devine” and “wow, the dahl is so flavoursome and rich”. They would have loved some naan bread, but the girls didn’t manage to get it on the plate.

Cathy and Anna cooked Chermoula quail with roasted baby carrot and quinoa salad. The quail was perfectly pink and the judges liked that they had boned the quail. The dish was “fresh” and “everything was done well”. Some of the judges (Manu and Pete) had dry quail breast.

Here are the scores.

The team eliminated tonight on MKR was Cathy and Anna